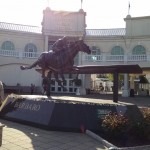 Kentucky Derby Museum welcomes four new members to its Board of Directors. Joining the Board is Brandy Harmon, Vice President of Ticketing & Venue Operations for Breeders’ Cup Ltd., Ja Hillebrand, CEO of Stock Yards Bank & Trust, Briana Lathon, Senior Compliance Officer, Group & Military at Humana and returning to the Board is Harold Workman, who is retired from his career in public service.

“It has been a tough year on many businesses, but especially for non-profit organizations like the Kentucky Derby Museum,” said Pat Armstrong, President & CEO. “Our Museum is navigating challenges in 2020 with steady direction from our Board. With their experience and keen business skills, the incoming Board members will further strengthen our organization moving forward in these challenging times.”

Kentucky Derby Museum, a 501(c)(3) non-profit organization, is governed by a 22-person Board of Directors, committed to the highest standard of business ethics. The Museum Board monitors Museum operations, provides financial oversight, and helps guide the growth of the Museum. The new Board members will serve a three-year term.

About the new Board Members:

Brandy Harmon
Brandy oversees all ticket sales and operations for the Breeders’ Cup World Championships, beginning her career there in 2009. A graduate of the University of Kentucky with a Bachelor of Science in Biosystems & Agricultural Engineering, she began her career as Director of Sales & Operations for Dapple Bloodstock/Season Exchange, and worked her way up the ladder through the equine industry. Harmon is a member of the Thoroughbred Club of America, served on the board of directors for the Oregon TOBA, Race for Education, and a member of several industry organizations. She resides in Lexington, KY with her husband.

Gormley
He served as Executive Vice President and Director of Private Banking until 2008. In 2008, he was appointed to the Company’s Board of Directors and named President. In 2018, Ja became Chief Executive Officer.

Briana Lathon
Briana Lathon is an attorney and life-long Louisvillian. She graduated from Centre College in 2015 and the University of Louisville Brandeis School of Law in 2018.Briana is currently employed by Humana as a Senior Compliance Officer for the commercial and military group. Prior to Humana, Briana spent two years in private practice as a business litigation attorney. During law school Briana served as the Black Law Student Association President, Lead Legal Research Fellow for the Center for Land Use and Policy, and was named a Brandeis Human Rights Advocacy Fellow by the University of Louisville and Louisville Bar Foundation.

Harold Workman
Harold Workman, of Louisville, received a Bachelor’s Degree in Animal Science from the University of Kentucky College of Agriculture. Workman was named President and CEO for the Kentucky State Fair Board in 1993. Thanks to his efforts, the Kentucky Exposition Center is home to several signature events including the North American International Livestock Exposition. When he took on the challenge of establishing a major livestock exposition, he set the groundwork for an event that would annually attract thousands of producers and exhibitors. The event has grown from 2,500 head of beef cattle in its first year to becoming the largest all-breed, purebred show of its kind. Under his leadership, the Exposition Center was transformed into one of the ten largest facilities of its type with more than 1.2 million square feet of indoor space.