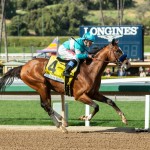 Authentic, winner of the Kentucky Derby at Churchill Downs and Breeders’ Cup Classic at Keeneland Race Course, has been retired to stud.

The 3-year-old colt will stand at Spendthrift Farm in Lexington, Kentucky, next year for a breeding fee of $75,000. The farm is owned by B. Wayne Hughes, who co-owns Authentic with MyRacehorse, Starlight Racing and Madaket Stables.

Authentic earned wire-to-wire victories in the Kentucky Derby in September and the $6 million Classic last weekend at Keeneland. He is a favorite to win an Eclipse Award for 3-year-old of the year.

“Ultimately, we just felt there wasn’t a lot more to accomplish for a Kentucky Derby and Breeders’ Cup Classic winner, so we have made the decision to retire Authentic to stand alongside his champion sire Into Mischief,” Ned Toffey, general manager at Spendthrift, said Monday. “It is very rare that you come across a 3-year-old as well bred, talented and accomplished as Authentic.”

Trained by Bob Baffert, Authentic had six wins in eight starts and career earnings of $6,191,200. His only losses this year came in the Santa Anita Derby and the Preakness, where he finished second both times.

We are looking forward to watching his breeding career.

Background
Authentic is a bay colt with a white blaze bred in Kentucky by Peter E. Blum Thoroughbreds. He was from the tenth crop of foals sired by Into Mischief, who won the Los Alamitos Futurity and went on to become a highly successful breeding stallion. Into Mischief is best known as a sire of sprinters, including Goldencents, Practical Joke and Eclipse Award winner Covfefe. However, when bred to mares of sufficient quality, Into Mischief has also sired horses who can compete at classic distances. Authentic’s dam Flawless, a daughter of Mr. Greeley, won her first start by ​13 1⁄4 lengths but bowed a tendon in her second start, ending her career. Blum noted that he kept her as a breeding prospect because of her speed. Authentic was the fourth foal out of Flawless and her third winner.

In September 2018, the yearling was consigned to the Keeneland Sales and was bought for $350,000 by representatives of SF Bloodstock and Starlight West. He was sent into training with Bob Baffert. His ownership group underwent several changes over time as SF Racing offered shares to other partners, who in turn sold shares to others. In his first race, he was owned by SF Racing, Starlight Racing, Madaket Stables, F. Hertrich, J. Fielding and Golaconda Stables. In June 2020, a majority share was purchased by B. Wayne Hughes of Spendthrift Farm, which stands Into Mischief. A minority interest was purchased by MyRaceHorse Stable, which in turn sold 12,500 microshares for $206 each to over 4,000 people.