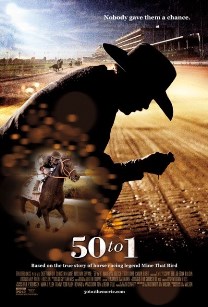 As we said in a blog weeks ago, ’50-1′, a movie about Mine That Bird’s exciting victory in the 2009 Kentucky Derby, will be released in theaters in the spring. In a departure from normal movie promotion, members of the cast and crew of the film will take part in a cross-country bus tour that will retrace the route trainer Chip Woolley took when he hauled Mine That Bird in a trailer from New Mexico to Churchill Downs, a 1700 mile tour.

It seems that the tour will start at Sunland Park in New Mexico, where Mine That Bird’s remarkable Kentucky Derby journey started. There are now stops scheduled for the Fair Grounds for the Louisiana Derby and at Oaklawn Park for the Arkansas Derby. The tour will be in Kentucky from April 14-18. We hope they will stay for the Kentucky Derby! 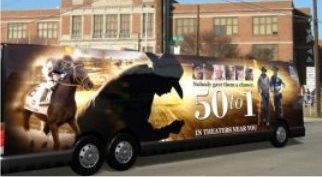 Other stops are to be determined. Those wanting the “50 to 1” tour to stop in their town should email requests to 50to1themovietour@gmail.com, including in the subject line: 50 to 1 Movie Tour — first and last name, town, state and zip code.

Director Jim Wilson is behind the idea, and has several cast members lined up, including stars Skeet Ulrich (who plays Woolley) and Christian Kane (Mark Allen). Other actors in the film will participate when their schedules allow.

“… Obviously you don’t see talent going out and doing this often. I’m surely not paying them,” Wilson told the Louisville Courier-Journal in an interview. “The idea of getting on a bus is pretty novel — and also going to not just the major cities but to go out into the heartland of America and saying, ‘Come see this true racehorse story, which is ‘50 to 1.’ … We’re like the underdog, but we’re going to get there. And they’re all game for that.”

Most horse racing fans had not heard of trainer Chip Woolley when he trailered Mine That Bird from New Mexico to Churchill Downs with his F-450 Ford truck. That changed when Mine That Bird and jockey Calvin Borel won the 2009 Kentucky Derby at 50-1 odds.

The real-life Mine That Bird will meet up with the cast at select stops coinciding with race tracks that can host the Derby winner.

So how did Wilson get the cast to agree to travel together on a bus for month?
“In this business we’re kind of like carnies,” the Oscar-winning producer of Dances with Wolves said by phone. “We’re vagabonds, gypsies; we travel. So when you do a movie, it’s not unlike getting a call like I gave saying, ‘Hey, let’s go have some fun, let’s go have a tour, let’s share this film.’

Cast members include Skeet Ulrich (playing Woolley) and Christian Kane (co-owner Mark Allen) They along with Wilson and co-producer and co-writer Faith Conroy, are in for the whole tour. Others will hop on as their schedules permit.

Borel, who plays himself in the movie, will participate when able, Wilson said.

“I’m hoping this journey answers three burning questions,” Ulrich said in a release. “One, are audiences tired of the blockbuster and ready to be uplifted by the values of hard work and integrity? Two, can we inspire our audiences to stick to their guns and do what they love at all costs? And three, does Christian snore louder than Todd?”