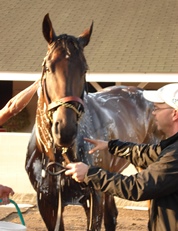 Darley America has announced by press release that they will once again offer on line auctions for 2014 seasons to three stallions standing at its Jonabell location – Medaglia d’Oro, Lonhro and Street Sense.

This edition of “Bid for Glory” will be held three consecutive weeks starting October 9. Every week, one season each to the aforementioned stallions, will be held with the highest bidder obtaining the season at Darley’s standard live foal, stand and nurses terms. Interested parties can register to participate.

Charlie Boden, Head of Sales at Darley in America, said, “Following the overwhelming success of the online auctions conducted earlier this year, we are delighted to be able to provide the opportunity for our breeders to gain access to a group of stallions that we feel strongly will be oversubscribed for the upcoming breeding season.”

Progeny of Medaglia d’Oro continue to be in high demand both on and off the racetrack. In the sales ring, his yearlings again are proving hot commodities. One, a $1.7 million offering, is a half-sister to Kentucky

Kentucky Derby and Preakness Stakes winner Super Saver rejoins the stallion ranks at Darley in America, after spending a year at Darley’s stallion operation in Japan. He is another sire who will also be in high demand in 2014.

This 2009 Breeders’ Cup Juvenile winner is having his best year yet at stud. His two-year-old daughter, Sweet Reason, kept her undefeated record intact with an impressive runaway victory in the Spinaway Stakes, while other daughter, Aubby K, proved to be the best in the Humana Distaff at Churchill Downs on Derby Day in May.

His popularity has also boosted demand for his yearlings with at least 13 selling for six figures at Keeneland September.

And last, but by no means least, is the fantastic Australian Champion sire Lonhro who stood his second season at Jonabell in 2013. One look at his race record, along with his fantastic conformation and presence, and it’s not hard to figure why demand remains so high for this “Shuttler from Down Under.”

All one needs is a mare, a password, and a dream to get involved with this fall’s edition of Darley’s “Bid for Glory” online auction, so make sure to register now. The auction will begin on Wednesday, October 9, and the first week’s bidding will end Friday, October 11 at 5:00 pm Eastern Standard Time. The following two weeks, auctions will begin each Wednesday at 9:00 am and end Friday at 5:00 pm.