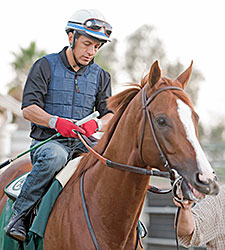 Word from trainer Art Sherman is that the thoroughbred is still pointing to the $1 million Pennsylvania Derby on Sept. 20. The horse racing world can’t wait!

Quotes from Los Alamitos include:

“I’m sure he’s getting stronger,” Sherman said. “I don’t know how the track variant was today. It could be a little on the slower side. So that might be why I was thinking of a little bit faster work.”

“I need to get him tight enough to go a mile-and-an-eighth right off the bat,” Sherman continued. “He’s had a little time off. My horse is a funny horse. You think he might not be tight enough but he does everything so easy that he’ll surprise you.”

The chestnut is scheduled to work next at Los Alamitos Sept. 6 between races.

Jockey Victor Espinoza was aboard California Chrome for his workout last Friday. He said the todays work was “better than last time.”

In describing the work, Espinoza said, “Not too bad. He went nice and easy. First time (going) five-eighths, so I don’t want to go too fast. Art, he told me just to stretch his legs a little bit and just get comfortable. Not too crazy, he did pretty good. It seems like he’s getting there.

“I think each work he’s getting better.”

When asked about the Pennsylvania Derby, Espinoza said, “I’m really excited to go there. Especially with this guy, California Chrome. I think it will be fun. It will be an exciting race for him.”

The Pennsylvania Derby would be California Chrome’s only race before the Breeders’ Cup Classic on Saturday, November 1 at Santa Anita Park.