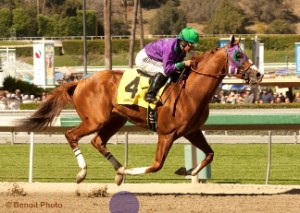 2014 Kentucky Derby winner California Chrome appears likely to make one more start this year, on Saturday, November 29 in the Hollywood Derby on the turf at Del Mar Race Track.

According to the Daily Racing Form’s Jay Privman, Trainer Art Sherman spoke to him at Del Mar and said that the Kentucky Derby and Preakness winner came out of the Breeders’ Cup Classic in great shape. Sherman has been eager to try California Chrome on the grass, and has circled the Hollywood Derby on November 29 as a target for the colt.

“He came out of the Breeders’ Cup great,” Sherman told the Daily Racing Form that “I’m going to work him on the grass here on the 23rd, and if he handles it like I think he will, there’s a good chance he’ll run.”

“It’s a perfect time to find out if he likes it,” Sherman continued. “And if he does, it gives us many more options for next year. The way he travels, I think he’ll really like it. I think he’ll be a grass horse, too.”
The 2014 Hollywood Derby will be run at 1 1/8 miles on the turf. It had been run over 1 1/4 miles when it was held at Hollywood Park. The current configuration of Del Mar’s turf course will not allow for 10-furlong turf races, hence the 1 1/8 mile race.

Sherman also said that regardless of the outcome of the Hollywood Derby, California Chrome’s first major target for 2015 would remain the Dubai World Cup March 28.

California Chrome, who lost the November 1st Breeders’ Cup Classic by a long neck to Bayern, earned $500,000 for his third and has now banked $3,827,800 this season while winning five of eight starts. In addition to his classic victories, the California-bred son of Lucky Pulpit – won the Santa Anita Derby and San Felipe Stakes. His career mark stands at 8 wins, 1 place and 1 show from 15 races with earnings of $4,042,650.

Wonder what running in the Hollywood Derby will do to change the Horse of the Year picture?