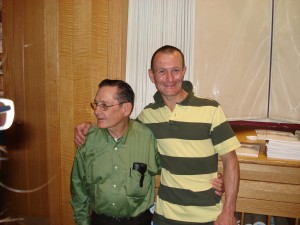 Hall of Fame and three time Kentucky Derby winning jockey Calvin Borel said he would resume his riding career Aug. 27 at Ellis Park. Calvin retired from riding in March of this year with little explanation telling his agent at the time that it was just time in a career that began in 1983.

Borel said he was conflicted but had been getting some pressure from Lisa Borel to return to Central Florida where she lived and had show horses. While the jockey and Lisa were in a long-time relationship and she took his name, he said they never were married. Borel said he went to Florida but the relationship didn’t work out.

He then went to his native Louisiana to spend time with family, then came to Kentucky. In early July he said he hadn’t discounted a return to riding but needed time to think about it.

Borel said: “I didn’t like it. I took enough time off. It wasn’t fun anymore. Some people quit because they’re tired of it. I’m not tired of it. I was in New York for like two weeks, getting on some horses for ‘Coach,’ Wayne Lukas, and he said, ‘You’re not ready to retire.’ I just want to come back and ride and see what happens.”

“When you love something, it’s hard to break (away),” Borel told the Ellis Park media team. “This is all I know how to do, and I love it. And I’m healthy. If I wasn’t healthy, I could walk away. But I’m doing so good now. I’m not fighting my weight. I’m so happy.”

49 year old Borel said he wanted to get on some mounts before Kentucky Downs and Churchill Downs begin their September meets.

Borel just returned to Kentucky from New York where he attended the Hall of Fame induction ceremony last week (Rachel Alexandra was inducted) and said his agent will be Frank Bernis, who also lines up the mounts for Brian Hernandez Jr.

Borel was the 2010 recipient of the George Woolf Memorial Jockey Award. A favorite jockey in the horse racing world, Calvin won the Derby aboard Street Sense (2007), Mine That Bird (2009) and Super Saver (2010). He earned the nickname “Calvin Bo-rail” for his fondness for “riding on the rails”.