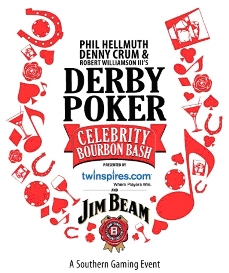 Southern Gaming Magazine announced today via press release that Thoroughbred Charities of America (TCA) has been selected as one of two charitable beneficiaries of the Derby Poker Celebrity Bourbon Bash, sponsored by Jim Beam and Twinspires.com. The party and poker tournament will be held on Thursday, May 1 at the Olmsted in Louisville, Ky. and will be hosted by Hall of Fame coach Denny Crum and poker professionals Phil Hellmuth, Jr. and Robert Williamson, III. Louisville-based Blessings in a Backpack has also been selected as a beneficiary. Kentucky Derby week and horse racing fans should enjoy this event.

Formally known as the Derby Poker Championship, the event has become a must-attend Derby party that attracts an array of celebrities, athletes, jockeys, poker professionals and race fans looking to kick-off the Derby weekend in-style.

“The Derby Poker party has grown into the staple Oaks Eve event for celebrities and Derby guests,” said G. Douglas Dreisbach, event producer and general manager of Southern Gaming. “Our goal is to have a first-class event while raising funds and awareness for our beneficiary charities.”

“We are thrilled to be a charitable partner of Southern Gaming’s annual Derby Poker event,” said Erin Crady, executive director of TCA. “As a charitable organization that operates exclusively on donations, we are deeply appreciative of this opportunity.”

“Poker and horse racing go great together,” commented poker tournament emcee Phil Hellmuth, Jr. “Last year we had the best party in Louisville on Thursday night with tons of celebs, music, a dance floor, a charity poker tournament and more. This year will be even bigger!”

Tickets and poker buy-ins can be purchased at derbypokerchampionship.com. The event is produced by Southern Gaming and Destinations, the South’s largest regional gambling magazine that also specializes in promotions, events and marketing for the gaming industry and is a division of Louisville-based Bisig Impact Group.