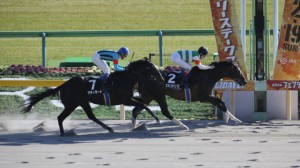 Epicharis, a grandson of Sunday Silence, earned a guaranteed spot in the 2017 Kentucky Derby with a victory in the Feb. 19 Hyacinth Stakes at Tokyo Racecourse.

With the win Epicharis is now undefeated in four starts and it gave him 50 qualifying points in Churchill Downs’ Japan Road to the Kentucky Derby standings. Mont Saint Legame, who earned 40 points for his victory in the first of the qualifying races in November, came in 10th in the Hyacinth but remains in second place in the rankings.

With Christophe Lemaire up, the bay colt saved ground through the 1,600 meters (about one mile) while racing just behind the pace. He got through on the inside in the late going and went on to win by a three-quarter-length margin over Adirato.

Hypernova, a son of I’ll Have Another , finished third and a Tapit colt, Foggy Night, came in fourth after a tardy start for jockey Ryan Moore.

A spokesman for U Carrot Farm, which owns Epicharis, said no decision has been made about sending the colt overseas, although the UAE Derby (G2) at Meydan March 25 is a possibility.

“We are considering a possible run in Dubai at the moment and will take things one race at a time,” he said.

Lemaire, however, said he feels Epicharis would be a viable contender in Louisville.

“I think he would do well, because he has got some speed at the start,” Lemaire said. “Today, if I had wanted to, I could have been in front and he traveled very easily.

Should U Carrot Farms decline the Derby bid, Mont Saint Legame’s owners would inherit the option. Adirato, with 20 points, would gain the option should the top two decline, but if he also declines, no other horse on the Japan Road to the Kentucky Derby would be eligible.

Epicharis won at first asking in August in a race restricted to first-time starters, followed that with an allowance win in Tokyo Oct. 15, and completed his juvenile season with a victory in the Nisai Yushun at Hokkaido Nov. 1. He won his first three races by a combined 25 lengths. The Hyacinth was his first start of the year and he was heavily backed by enthusiastic Japanese fans.

The colt was bred by Masatsugu Kamada. His sire, Gold Allure, is by Sunday Silence and his dam, Stapes Mitsuko, is by Carnegie.

This is an edited press release