When we saw this article by Lucas Willard, we were reminded about an article sportswriter Oscar Otis wrote about the Kentucky Derby blanket in the 1960’s. We hope you enjoy Lucas Willard’s article for WAMC about “The Woman Behind Saratoga’s Floral Blankets”. 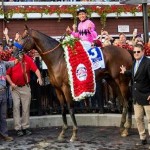 It’s a tradition in thoroughbred horse racing after a major race to drape the winning horse and jockey in a floral blanket. The Kentucky Derby is the Run for the Roses. The Preakness has the black-eyed Susan. With Saratoga Race Course set for its biggest day tomorrow, two blankets will be presented: one for the Personal Ensign and one for the Travers. WAMC’s Southern Adirondack Bureau Chief Lucas Willard reports on the local woman who has been making blankets for Saratoga for more than two decades.

On the days leading up to a big race, Susan Garrett starts working in her Saratoga County basement on the next floral blanket to be laid atop the next champion horse.

The blankets flush with colored carnations are a staple of winners’ circles across the country. But before 1994, the famed Saratoga Race Course didn’t have one for its longest-running stakes race.

So Garrett, who owned a flower shop at the time, called up the New York Racing Association.

“There was no floral blanket for the Travers race. They never had one,” said Garrett. “And I was looking at all the major stakes races in the country, you know, we’ve got from the Kentucky Derby, to the Preakness, to the Belmont, we all had a blanket. So I called NYRA and said ‘Why don’t we have one?’ And they said, ‘Why don’t you make one?’”

So she did. And since then Garrett has continued making Travers blankets. During Saratoga Race Course’s 150th anniversary season in 2013, Garrett made the blanket for the Whitney Handicap, using the pink Marylou Whitney Rose.

Now, she makes blankets for each major stakes race at Saratoga. This weekend she has two, the Travers and the Personal Ensign, another Grade I race.

Each one starts with making the blanket out of fabric, and then it’s off to the flower shop.

At Dehn’s Flowers in Saratoga Springs, more than 1,500 red and white carnations are soaking in buckets.

Deb Converse is holding the flowers for Garrett.

“The Travers blanket will primarily be red with a white edging to it and then she does lilies up on top.”

Converse says Garrett is among the best in the business.

“It’s exciting because we know what beautiful product is going to come out of these.”

After Garrett brings the flowers home, the afternoon before the race, it’s time to get to work.

First, she takes a flower, snips off the stem, and tacks it onto the blanket. “And once the glue dries, then we have quilting needles and our thread, we go through our blanket…like that…and then through the flower…”

The Travers blanket will have about 800 flowers sewn onto it. The Personal Ensign – about 700. But Garrett doesn’t do it alone. She has a small army of neighbors and friends who will stop over to lend a hand.

She’s excited to finish this pair and will watch the Travers Day races tomorrow, and then head to the nearby Wishing Well restaurant, which her family owns, for another tradition.

“Yeah I like to see this one go on the horse, and then I go over to the Wishing Well and paint the jockey in the winner’s colors outside and I’m done. For a little while. So I get to take a break,” said Garrett.