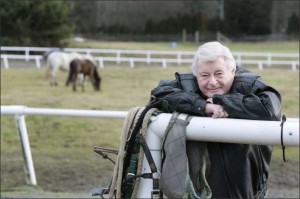 Former Washington Thoroughbred Breeders and Owners Association general manager Ralph Vacca, a long-time horseman and industry leader in the Northwest, died July 20 at his home in Auburn. He was 84.

The WTBOA released the following obituary:

Bud, as he was nicknamed by his father, grew up in the Rainier Valley and graduated from Franklin High School. He later attended Washington State University.

Both of his parents were avid horse racing fans and Ralph first attended Longacres as a young child. His love of horses grew after spending time on his grandparents’ vegetable farms, where they still used work horses. When he was 14, Ralph and his younger brother Richard rode the bus to North Seattle to take riding lessons.

Washington Racing Hall of Fame breeder, prominent horseman and teamster Frank Brewster and Terry McNulty would visit the Vacca family store, Pre’s Garden Patch, to buy fresh produce. They offered the Vacca brothers the chance to walk horses at Longacres at 50 cents a horse. So, while still in school, Bud would get up at 5 a.m. to go to the track and walk hots alongside his brother and close lifelong friend John Chatalas, before heading to Franklin High. Once school was out for the summer, the budding horseman’s favorite place was at the track, where he had dreams of becoming a jockey.

Ralph counted his “best moment” as the first time he walked through the back gates of Longacres and trainer G. L. Martin handed him a shank attached to the filly Seattle Belle to walk, telling him to “take her to the left.” “. . . walking a real racehorse was the most profound feeling I’ve ever experienced.”

After a short-lived career as an assistant manager of a Market Basket grocery, Ralph sent a dozen or more letters to major farms in Kentucky to apply for a job. He got two replies. One was a definite no and the other, from Stoner Creek Farm manager Charles Kenney, offered him $40 a week in a starter position, saying: “If you’re not afraid of long hours and short pay, come down.”

Early on in his stay at Stoner Creek, Kenney asked the young Vacca what his career goals were and when Vacca offered that he wanted to became a farm manager, Kenney nicknamed the enthusiastic youth “Manager” and helped give him opportunities to learn the various phases of the horse business. As well as working at Stoner Creek Farm, Kenney “loaned” the young horseman to Claiborne Farm to work with the “long” yearlings.

In April 1959 Ralph returned to Washington where he joined the then WHBA (later known as the WTBA and today, the WTBOA) staff as field secretary. Among his other duties were being the advertising representative for The Washington Horse (now Washington Thoroughbred) magazine and working with association’s 4 H program.

Ralph returned to Kentucky in October 1961 to take a position in the advertising department of the Thoroughbred Record. He next worked in the Lexington office of the Daily Racing Form where he did weekly columns about what was happening around the Kentucky farms.

In 1964, while working at the DRF, Ralph got to tag along with senior staff writer Barney Nagler, who was assigned to follow Northern Dancer in the Kentucky Derby. When that runner won the 90th Derby, the Washingtonian was with the esteemed racing journalist when he interviewed trainer Horatio Luro and rider Bill Hartack.

Ralph returned to the WHBA in September 1964, as advertising manager for association’s magazine. Sixteen months later he was promoted to editor. In May 1973, Ralph was appointed “interim” WHBA general manager and by the following November he was awarded the position outright.

In December 1974 the WHBA ushered in a new era when the association held their first auction at the new WHBA sales pavilion and offices located at Longacres.

Among the many innovations Ralph fostered was the institution of phone bidding at the 1977 WHBA winter sale. He was also active in a 1981 challenge, when attempts were made to establish Standardbred racing in Auburn. In the late 1980s, Vacca was instrumental in the development of Washington’s satellite legislation. Ralph was at the helm of the WTBA during the heady days (1978 to 1987) when racing boldly flourished, both nationally and locally.

For many years Ralph travelled to the Kentucky sales to help Washington horsemen bring back breeding stock. Among the most successful stallions he helped bring to Washington were Native Born (sire of Eclipse Award winner Chinook Pass), Balance of Power and Captain Courageous. Each stallion became a major influence in the state and sired many Washington champions.

In September 1990, the sale of Longacres to The Boeing Company was announced. In the years that followed Ralph played a huge part in trying to keep racing moving forward. Emerald Downs was opened in June 1996 and the WTBA found its new home there in January 1998.

In May 2020, then Governor Gary Locke appointed Ralph to the Washington Horse Racing Commission.

The passing of legislation that was important to fostering and growing the horse industry was always high on Ralph’s agenda. With his leadership, connections and perseverance many important pieces of legislation were passed in Olympia. Equally important through the years was stopping legislation which would have a negative impact on the industry.

On Ralph’s retirement from WTBOA on December 31, 2007, after 47 years with the association, Keeneland President and CEO Nick Nicolson penned the following words to be read at Ralph’s November retirement party: “The state of Washington maintains a respected position within the Thoroughbred community and much of it is attributable to your [Ralph’s] hard work during the last four decades.”

Longtime friend, mentor and Washington Racing Hall of Famer, the late Pete Pedersen, wrote: “There were a few visionaries before him, but Ralph picked up the reins early on and held a steady and progressive course.”

“Ralph Vacca has become the voice and face of the breeding and sales industry in Washington State. He has been consistent, reliable, articulate and credible – a true champion of the sport,” said his friend Ken Alhadeff.

After his retirement, Alhadeff was responsible for Ralph owning his first and only racehorse, the filly Dah Gift.

Ralph was also well known for his love and proficiency as a gardener.

Throughout the years Ralph served on the Washington Thoroughbred Foundation and THRUST boards, the Equine Art committee, and was actively involved in the Backstretch Chapel, Emerald Backstretch Daycare Center and WTBOA Youth programs. He also was on the WSU Equine Advisory Board and King County Agricultural Commission.

Among his awards were induction into the Washington Racing Hall of Fame (2013) and the S. J. Agnew Special Achievement Award (1990).

“I have always maintained that the racehorse business is more of a people business than a horse business. One of its greatest assets and most significant points is that so many people, from so many different walks of life, come together owing to their love and respect for the equine animal. Few other industries and/or businesses are so diverse.” Ralph Vacca.
He was predeceased by his parents. Ralph is survived by his children Darrell (Linda) Vacca, Melanie (Tom) Bidman, Dionne Stein, Kyle Vacca and Rachel (Rich) Pring; grandchildren, Rafe, Josh, Kevin, Garrett, Teddy and Julian; great-grandchild, Caelin; brother, Richard (Linda) Vacca; and many cousins, nieces and nephews.