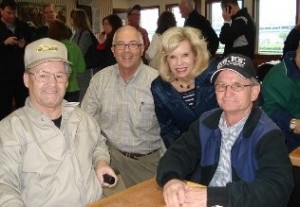 Mr. Turcotte rode the legendary Thoroughbred in a total of four races at Saratoga, and the legacies of the duo forever will be intertwined as the heroes of the historic, record-setting 1973 Triple Crown. Turcotte began his career in Toronto as a hot walker for E. P. Taylor’s Windfields Farm in 1959, but he was soon wearing the silks and winning races. As an apprentice jockey he rode Windfields’ Northern Dancer to his first victory. He gained prominence with his victory aboard Tom Rolfe in the 1965 Preakness Stakes.

Turcotte soon found himself working with Canadian trainer Lucien Laurin at the racetrack in Laurel, Maryland.

In 1972 he rode Riva Ridge to victory in the Kentucky Derby and the Belmont Stakes.

Turcotte became internationally famous in 1973 when he rode Secretariat to win the first Triple Crown in 25 years. He was North America’s leading stakes-winning jockey in 1972 and 1973. He became the first jockey to win back-to-back Kentucky Derbies since Jimmy Winkfield in 1902 and was the first jockey to ever have won five of six consecutive Triple Crown races (matched in 2015 by Victor Espinoza).

He was voted the prestigious George Woolf Memorial Jockey Award that honors a rider whose career and personal conduct exemplifies the very best example of participants in the sport of thoroughbred racing. He is the first person from Thoroughbred racing ever to be appointed a member of the Order of Canada.

Turcotte’s career ended in 1978 following a tumble from his horse, Flag of Leyte Gulf, at the start of a race at Belmont Park that left him a paraplegic.

On Friday, Aug. 5, Mr. Turcotte will greet guests at the National Museum of Racing and Hall of Fame from 10 a.m. until noon signing limited edition prints. Afterward, he then will make an appearance at Saratoga Race Course.

Over the weekend, the famed jockey will again be at Saratoga on Saturday, Aug. 6, and Sunday, Aug. 7, beginning at 10:30 a.m. each day. Saratoga sessions will be at the Secretariat.com booth adjacent to the jockey silks display on vendors row, and Mr. Turcotte will sign autographs and memorabilia as well as be available for photographs with fans at all scheduled appearances.

Coinciding with Mr. Turcotte’s Saratoga appearances, the authentic 1973 Preakness winner’s garland will be on display during the signings at both locations. The garland, an original artifact from the collection of Secretariat’s owner Mrs. Penny Chenery, is being offered for sale later in the year to benefit the equine charity R.A.C.E. Fund.