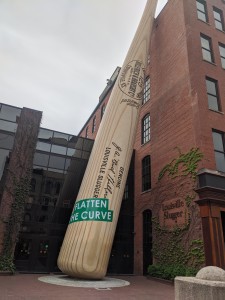 Note – #KentuckyDerbyTours was scheduled to visit there next Wednesday during Derby week.  Visiting the Slugger Museum is a non-racing highlight of Derby week. So much baseball history.

Iconic bat maker Louisville Slugger has closed down its factory and furloughed the majority of its workforce because of coronavirus shutdowns.

“We’re not doing any advertising. We’ve cut all our expenses we can. We’re just hoping we get back to normal before we run out of cash,” said CEO John Hillerich IV.

Louisville Slugger has been making bats since the late 1800s, and its relationship with Major League Baseball goes back to 1905, when Pirates Hall of Famer Honus Wagner signed a deal to produce a bat with his name on it. Babe Ruth, Ty Cobb, Lou Gehrig, Joe DiMaggio, Ted Williams, Jackie Robinson, Roberto Clemente, Hank Aaron, Ken Griffey Jr. and Derek Jeter are among baseball’s stars who used Louisville Slugger.

The wood bat factory closed earlier this week on March 19, three days after the Louisville Slugger Museum shut. The 120-foot bat outside its headquarters now a banner across the barrel reading “Flatten the Curve.”

The 165-year-old company produces about 2 million wood Louisville Slugger bats a year at its downtown Louisville plant, with around 50,000 going to Major League Baseball.

CEO John Hillerich IV said that if the company doesn’t soon crank up its Pennsylvania mill–and MLB has no timetable to start its season–then some of the wood set to become bats might spoil.