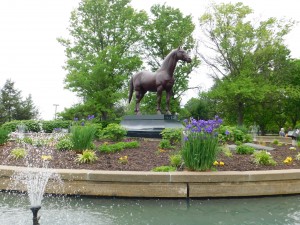 The legendary Man o’ War, one of America’s original sporting heroes, will be depicted in larger-than-life fashion via a 30′ x 30′ mural in downtown Lexington. The mural is being painted by Agustin Zarate and is part of the Kentucky Horse Park’s Man o’ War Celebration, presented by Windstream, which includes a series of events to highlight the life of the great racehorse and horse racing.

An unveiling party at The Village Idiot is slated for Thursday, June 29, at 4 p.m. to celebrate the completion of the mural, which was commissioned by LexArts and is sponsored by Mt. Brilliant Farm. The Village Idiot will offer food and drink specials, and the Kentucky Horse Park will provide complimentary tickets as door prizes at the event.

The Man o’ War mural will span the entire side of the two-story Village Idiot building and will commemorate the horse’s victory in the 1920 Belmont Stakes. Based on a historic photograph during his racing years, it will portray Man o’ War parading in front of the Belmont crowd following his historic feat.

“Agustin’s rendering of the Man o’ War mural is extremely impressive and I can’t wait to see the larger-than-life finished product,” said Kentucky Horse Park Executive Director Laura Prewitt. “Man o’ War was truly a remarkable horse, and I hope this mural will become a downtown fixture that raises awareness of his life and legacy from both locals and visitors.”

This is the first building mural project for Zarate, a native of Mexico City and a longtime Lexington resident. An experienced painter, muralist, graphic designer, and illustrator, Zarate has worked with various medium including oil, acrylic, watercolor, and airbrush.

Zarate was selected by LexArts and Mt. Brilliant from many local artists that submitted proposals for the Man o’ War project. He was chosen based on his authenticity in capturing the horse in all his racing greatness.

“There was a lot of interest from the artist community in painting a large scale tribute to the legacy of Man o’ War,” said LexArts Community Art Director Nathan Zamarron. “Dozens of artists from throughout Kentucky submitted talented designs with a wide variety of artist interpretations. Agustin Zarate was selected for his mastery of realism and understanding of the anatomy of the horse. We are confident the finished result will be a lasting icon and a treasured work of art for Lexington.”

A commemorative beer crafted by Alltech to enhance the Man o’ War Celebration will also have its release at the mural unveiling party. Called “The Mostest Wheat Ale” after Man o’ War’s nickname, the celebratory beer will be available at various locations throughout Lexington on tap this summer.

“We are happy to honor one of the most famous race horses of all time with a beer brewed for the celebration of Man o’ War,” said Pete Weiss, marketing manager of Alltech. “Mostest Wheat Ale tells the story of Man o’ War, and that he was the ‘mostest’ horse to ever run.”

The Kentucky Horse Park’s goal in its season-long Man o’ War Celebration is to celebrate the life of the legendary horse, as well as encourage people to visit the premier tourist destination, which is currently hosting a special exhibit entitled Man o’ War: The Mostest Horse That Ever Was.”