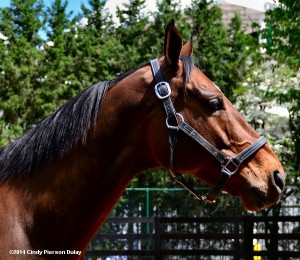 Mine That Bird at the Kentucky Derby Museum. Photo (c) Cindy Pierson Dulay

Academy Award winning Producer Jim Wilson’s latest film, the highly acclaimed “50 to 1,” which depicts the down-home Cinderella story of 2009 Kentucky Derby winner Mine That Bird, will make its California debut on Friday, May 23 in nearby Monrovia at Krikorian Premiere Theatre and at six other Krikorian venues in Southern California—in Buena Park, Downey, Pico Rivera, Redlands and Vista.

Wilson, who produced 1990’s Dances With Wolves, which starred Kevin Costner and took Best Picture honors and six other Academy Awards, is a longtime horse owner and passionate lover of horses and Thoroughbred racing. He participated in a question and answer session this morning regarding the film, its rollout and reactions that it has created, two weeks in advance of its Southern California debut.

Q.) We’ve heard good things about 50 to 1 and its depiction of a small group of New Mexico horsemen en route to the win of a lifetime. How long do you anticipate the film running locally?
“It’s all according to supply and demand. As long as people go, it will continue to run. Typically, theatres now will show a film for a week or two or longer, depending on how many people are coming. I’m in a theatre in New Mexico now where we beat Spider Man and we’re in our eighth week. You just never know.”

Q.) George Krikorian is very involved in the Thoroughbred business as an owner/breeder and he now sits on the California Horse Racing Board. Has he seen the film?
“I invited George to a screening, I would say five months ago…He said ‘When you get ready to release it in California, give me a call.’ So, obviously both of us being horse owners, I said ‘You bettcha.’ So when we finished our seven-state tour, I called George and he said ‘Let’s put it up there.’

Q.) This state-by-state rollout is kind of an unorthodox approach with a new film. What’s been your thinking on this?
“It’s really unorthodox. Part of it is I don’t have the money. I don’t have the funds of a giant studio that can put up 30 or 40 million dollars and gamble and see how we’re going to do. So part of it is financially driven in that we’re able to go state by state and as you do one state, you sort of take those proceeds and go on to the next. It’s kind of a throwback to the 70s and 80s when there were a lot of grassroots (movie) campaigns and it worked…The first idea was to go from New Mexico (where Mine That Bird was based) and weave our way up through seven states to Kentucky, which we did on tour. We were on a bus for nearly six weeks…It’s just that love and attention that I find really pays dividends…It may sound silly, but Mine That Bird was 30 lengths behind (in the 2009 Kentucky Derby) and he took his time. This kind of film is going to need a rollout. It’s a word of mouth film…If you go on Tomato Meters or IMVB, people are loving this film…”

For the rest of the story, Southern California horse racing fans will have to wait unit “50 to 1” comes to town on May 23.