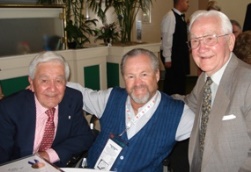 Leonard Lusky, the spokesman for Hall of Fame jockey Ron Turcotte said the jockey who rode Secretariat to victory in the 1973 Triple Crown hopes to be released from the hospital shortly. He will return home and recover from his broken legs suffered in a one-vehicle crash nearly four weeks ago.

Turcotte suffered a fracture in each leg when the van he was driving hit an icy patch on a road near his home in New Brunswick and flipped on its side. A family friend was a passenger in the vehicle and suffered minor injuries.

Royal Canadian Mounted Police said the accident occurred in the morning Four Falls. He said the snow-covered roads were slippery at the time and the accident is under investigation.

Leonard Lusky said that Ron’s “recuperation is going well, and he hopes to be released soon, begin physical therapy, and continue his recovery.” The retired jockey remains “upbeat and spirited,” Lusky said, in a hospital in New Brunswick, Canada.

Lusky also said that the 73-year-old Turcotte is thankful for the support from friends and fans, and is still sporting blue and white casts—the colors of Secretariat’s owner Meadow Stable.