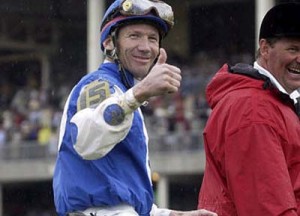 Stewart Elliott, best known for his 2004 Kentucky Derby and Preakness Stakes wins aboard Smarty Jones, has been selected by a nationwide vote of his peers as the winner of the 2017 George Woolf Memorial Jockey Award.

A dominant force for many years in the Mid-Atlantic region, Elliott, 51, shifted his tack on a full-time basis to Southern California in 2016 and has firmly established himself as one of the circuit’s top riders.

“On behalf of our membership, I’m elated that Stewart has been selected as this year’s Woolf Award winner,” said Jockeys’ Guild National Manager, Terry Meyocks. “Stewart is an exemplary example of what the George Woolf Award is all about. He’s not only a top rider, he’s a top human being as well and he continues to be a solid role model for jockeys everywhere. On behalf of the Guild, I’d like to congratulate him on what is surely a crowning achievement in his career.”

One of the most highly coveted honors in all of American racing, the Woolf Award, which was named in honor of the legendary George “The Iceman” Woolf, can only be won once and was first presented by Santa Anita in 1950. The award, which honors riders whose careers and personal character earn esteem for the individual and the sport of Thoroughbred horse racing, was won last year by Victor Espinoza.

Born in Toronto, Canada, on March 11, 1965, Elliott has now won more than 4,700 races and has earned the respect of horsemen nationwide for his wide array of skills and consistent work ethic. Regarded as a strong finisher who is also an outstanding judge of pace, Elliott currently counts local trainers Bob Baffert, Kenny Black, Mike Puype, Art Sherman, Neil Drysdale, Mike Harrington, Jeff Bonde and many others among his regular clientele.

“He’s just class through and through,” said Elliott’s agent, Craig Stephen. “He loves to work. He’s happiest when he’s on the back of a horse.”

One of five Woolf finalists, Elliott outpolled contemporaries Kerwin Clark, Julien Leparoux, Glen Murphy and Scott Stevens to win this year’s edition. In becoming the 68th Woolf Award winner, Elliott follows in the footsteps of most of the greatest riders of the modern era.

The 2017 Woolf Award Trophy, a replica of the life sized statue of Woolf that adorns Santa Anita’s Paddock Gardens area, will be presented to Elliott in a Winner’s Circle ceremony on March 26th between races.