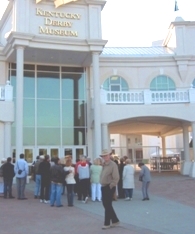 To celebrate the grand premiere of the new 360° media experience, The Greatest Race, the Kentucky Derby Museum offered admission for $3.60 for all guests during the first three hours the Museum is open (11 a.m. to 2 p.m.) on Sunday, Dec. 6. Guests will be treated to free doughnuts from Thorntons and the first 360 people in attendance will receive a limited-edition poster commemorating The Greatest Race. The official public premiere is scheduled for 11:10 a.m. at the Museum, located at 704 Central Avenue near Gate 1 of Churchill Downs Racetrack.

The Greatest Race will be shown at 10-minutes after the hour, every hour and is included with the price of general admission to the Kentucky Derby Museum.

Kentucky Derby Tours can hardly wait to see the new version of ‘The Greatest Race’!