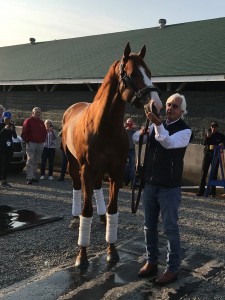 An unraced maiden the morning of Feb. 18, Bob Baffert’s Justify, who would go on to break his maiden later that afternoon en route to five additional victories that included the Grade I Santa Anita Derby on April 7, has been retired as an undefeated Triple Crown Champion, according to a press release issued by the NTRA late this morning.

A magnificent chestnut colt by Scat Daddy out of the Ghostzapper mare Stage Magic, Justify retires unbeaten in six career starts with earnings of $3,798,000.

In a racing career that spanned just 111 days, Justify broke his maiden here going seven furlongs by 9 ½ lengths under Drayden Van Dyke. With Mike Smith aboard for his next five starts, he took a one mile allowance test by 6 ½ lengths on March 11, prior to defeating multiple Grade I winner Bolt d’ Oro by three lengths in the $1 million Santa Anita Derby on April 7 at 1 1/8 miles.

From there, it was on to a three length romp over a sloppy surface in the Kentucky Derby May 5 and a gutty half length triumph over a very wet and muddy track in the Preakness Stakes May 19. Justify then became racing’s 13th Triple Crown winner with an authoritative 1 ¾ length win in the Belmont Stakes June 9.

Baffert, who was believed to have been considering potential starts in both the Grade I, $6 Breeders’ Cup Classic Nov. 3 at Churchill Downs and the Grade I, $16 million Pegasus World Cup Invitational Jan. 26 at Gulfstream Park, made official what had been feared for weeks—that time had simply run out on the possibility of one more dance this year.

“Justify had some filling in his ankle, and he is just not responding quick enough for a fall campaign,” said Baffert this morning from Del Mar. “We all wanted to see Justify run again, but ultimately it is my responsibility to make sure he is perfect. Without 60 to 90 days, I can’t be definite.”
Raced by WinStar Farm, China Horse Club, Head of Plains Partners, LLC and Starlight Racing, it is believed Justify is currently worth between $75 and $100 million dollars as a stallion prospect.

“The timing is bad for another start in 2018, and therefore, we have to retire him,” said WinStar Farm’s Elliott Walden. “Like (2015 Triple Crown winner) American Pharoah, we can’t take the risk of running Justify as a 4-year-old. We all wanted him to finish his career in the Breeders’ Cup Classic, but it was not meant to be.

“As has been reported, there is a possible sale to Coolmore (Lexington, Ky.) in place, but that won’t be finalized until a later date. We are excited to share him with our fans starting the middle of August after he gets acclimated.”

Justify, who was paraded before an on-track crowd of 17,403 at Santa Anita on June 23, will be paraded between races at Del Mar this Saturday.