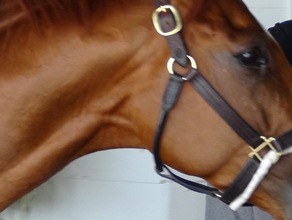 Animal Kingdom returned to the United States earlier this month. Animal Kingdom had been in Dubai last March to win the Dubai World Cup – then on to England for the Royal Ascot and finally his first stallion season in Australia.

This well-traveled colt has travelled more in the past 12 months than many people travel in a lifetime. This is the first time he has been back in the USA in nearly a year.

The son of Leroideanimaux started last year on the racetrack in Florida, where he finished second to Point of Entry in the Gulfstream Park Turf Handicap, but that second-place finish was just a prep race for the worldwide journey to come.

The then 5-year-old shipped over to Dubai for his next start and became the first Kentucky Derby winner since Silver Charm to win the Dubai World Cup. Animal Kingdom impressed the world when he made the win look effortless, taking control in the late stages and winning by an easy two lengths ahead of some of the best horses in the world. The win made the horse an international star, a fact made clear when he traveled to England for the Royal Ascot meet.

“I think he’s got a lot more attention internationally since winning in Dubai,” trainer Graham Motion said after the horse won the Dubai World Cup. “Now that he’s in England, racing is a little more focused … so certainly he’s drawn a lot of attention. And I think also the fact that he’s a Kentucky Derby winner in England, I think people are very excited about that.”

Animal Kingdom put in a disappointing run at Royal Ascot in his final start before heading to his first season at stud in Australia. The stallion finally returned back to the United States in early January. Now he will stand his first Northern Hemisphere season at Darley in 2014.

Darley was founded in 1981 when Sheikh Mohammed purchased Dalham Hall Stud in Newmarket, Suffolk, now home to some of Europe’s leading stallions including Dubawi and New Approach. In the United States, Darley is based at the historic Jonabell Farm in Lexington, Kentucky. Irish operations are at Kildangan Stud in Kildangan, County Kildare. Darley has two studs in Australia, one in Victoria and one in the Hunter Valley in New South Wales.

Darley also has a stud in Japan and in 2012, stood stallions in China for the first time.