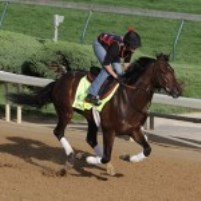 Orb in 2013 at Churchill Downs during Derby week

Claiborne Farm’s freshmen sire Orb had his first winner June 11 when Earth won his debut at Gulfstream Park.
Eclipse Thoroughbred Partners’ Earth ran down frontrunner Pocket Book to get his neck in front in the five-furlong maiden special weight turf race for 2-year-olds.

Pocket Book, a Wesley Ward-trained filly, popped out of the gate and set fractions of :21.75 and :44.26 through a half-mile, with a clear advantage throughout. Earth improved his position around the turn, then rallied through the stretch with slight urging to overtake Pocket Book in the final strides for trainer Todd Pletcher. The pair finished 5 3/4 lengths in front of Seattle Treasure in a final time of :56.43 over the firm turf.

Bred by Calumet Farm out of an unraced Speightstown mare, the colt was a $190,000 purchase from the Four Star Sales consignment to 2016 Fasig-Tipton Kentucky July select yearling sale.

Orb is best known for his 2013 Kentucky Derby Presented by Yum! Brands (G1) victory. He had won four straight races, including the Besilu Stables Fountain of Youth Stakes (G2) and the Besilu Stables Florida Derby (G1), leading into the Derby. The son of Malibu Moon retired with a record of 5-0-3 from 12 starts and $2,612,516 in earnings.

On November 5, 2013, he was officially retired from racing and returned to Claiborne Farm, where he had been foaled, to stand at stud as a breeding stallion for the 2014 season. Orb has also been syndicated, and all of the members have breeding rights relating to the number of shares they hold. He was bred to approximately 105 mares in 2014.

Ranked seventh on the first-crop sire list prior to the victory, Orb has five other runners so far, three of which are placed. The stallion stood 2017 for a $25,000 fee which is the same fee since he retired.