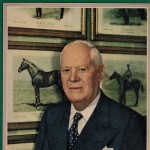 Col. Matt Winn, the former president of Churchill Downs who served as the driving force in the development of the Louisville racetrack and his beloved Kentucky Derby, has been elected to the National Museum of Racing’s Hall of Fame as a 2017 Pillar of the Turf selections, it was announced Wednesday.

Winn will be inducted into the Hall of Fame with fellow Pillars of the Turf selections John R. Gaines and Ogden Mills “Dinny” Phipps – three of the most influential and respected individuals in American thoroughbred racing history – on Friday, Aug. 4 in Saratoga Springs, N.Y. along with jockeys Javier Castellano, Victor Espinoza and Garrett Gomez; trainer Tom Voss; and the racehorses Goldikova (Ire) and Good Night Shirt.

The Pillars of the Turf category is designated to honor individuals who have made extraordinary contributions to thoroughbred racing in a leadership or pioneering capacity at the highest national level. Candidates must be deemed to have represented the sport with indisputable standards of integrity and commitment through disciplines such as breeding and ownership, innovation, philanthropy, promotion and education. Winn, Gaines and Phipps join previous Pillars of the Turf selections August Belmont II (2013), Paul Mellon (2013), Col. E.R. Bradley (2014), E.P. Taylor (2014), Alfred Vanderbilt II (2015), John Hay Whitney (2015), Arthur B. Hancock Jr. (2016) and William Woodward Sr. (2016) in the Hall of Fame.

Martin J. “Matt” Winn (1861-1949), a native of Louisville, Ky., watched Aristides win the inaugural Kentucky Derby in 1875 and saw every edition after that until his death at the age of 88 in 1949, catching the race’s 75th running before he died. Winn helped guide the Kentucky Derby on a path from humble beginnings into America’s signature race, among other contributions to the sport.

In 1902, Winn formed a syndicate of investors that purchased struggling Churchill Downs for $40,000. He made immediate renovations to the track’s clubhouse and used his unique marketing skills to help Churchill turn a profit for the first time in its history. In 1908, Louisville officials began enforcing an anti-bookmaking law that threatened the viability of Churchill Downs, so Winn began using long discarded French pari-mutuel machines to handle betting. They were immediately popular with the betting public and more were added.

In 1911, Winn changed racing forever by introducing the $2 minimum bet; in the past, the minimum pari-mutuel bet had been $5, beyond the feasibility of most working people. Winn also saw the new economic power of women and desired to make Churchill Downs and the Derby interesting to them, too. He began the practice of inviting — and using money to lure — celebrities, male and female, to the Derby and publicizing their attendance.

By 1914, pari-mutuel machines were also installed at Latonia, Lexington, Douglas Park, Laurel and all Canadian tracks. In subsequent years, pari-mutuels replaced bookmakers at all American tracks.

Churchill’s finances steadily improved under Winn, who in 1915, convinced prominent owner Harry Payne Whitney to bring his New Jersey-bred filly Regret to the Kentucky Derby. The recruiting effort paid off handsomely, as the national publicity surrounding the Regret’s victory stamped the Derby as a marquee event on the American racing calendar. In recognition of his achievements, Winn was named an honorary Kentucky Colonel.

Winn worked at several other tracks in an executive capacity as well, including Latonia, Laurel, Lincoln Fields, Lexington and Douglas Park. In 1909, Winn and some partners opened a track in Juarez, Mexico, which succeeded for several years despite Mexican bandits occasionally spraying the track with gunfire. Legendary trainers Max Hirsch and Ben Jones were among those who sent horses to race at Juarez. The track was finally abandoned in 1917 when Pancho Villa and his guerilla fighters raided the area and made the track and its surroundings dangerous territory.

A 1949 New York Times article said of Winn’s influence on the Kentucky Derby: “He alone made it what it is today.” William H. P. Robertson in “The History of Thoroughbred Racing in America” said Winn was “a Moses who led the sport through trying times.” Winn was The Thoroughbred Club of America’s Honored Guest in 1943. The Matt Winn Stakes at Churchill Downs is named in his honor.