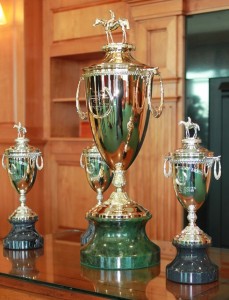 The priceless 14-karat gold trophy that will be presented to the owner of the 3-year-old Thoroughbred that wins the 142nd running of the Kentucky Derby on the first Saturday in May is scheduled to arrive at Churchill Downs Racetrack on Wednesday, April 13.

The hand-crafted Kentucky Derby 142 Winner’s Trophy, topped by horse and rider, will be unveiled during a media briefing at 10:30 a.m. (all times EDT) in The Parlay (Media Center) Media Briefing Room which is located just inside Gate 1 of Churchill Downs.

Churchill Downs officials will be joined at the media briefing by Susanne Blackinton-Juaire, a fifth-generation silversmith and a member of the Richline team that has created the trophy since 1975. Her family entered her profession in 1862 – 13 years before the first Kentucky Derby was run in 1875. She will be available for interviews and comments on the creation of this year’s trophy.

Media coverage of the arrival of the Kentucky Derby 142 trophy is welcomed. Media crews should enter the Clubhouse via Gate 1 and proceed to The Parlay. Parking is available near the Gate 1 entrance, located off Central Avenue. The rest of us will have to wait until May 7th

• The handcrafted trophy’s standard design was commissioned by legendary Churchill Downs President Col. Matt Winn for the “Golden Anniversary Derby” in 1924;
• The Kentucky Derby Winner’s Trophy is 22 inches tall and weighs approximately 65 ounces, excluding its jade base;
• The trophy is topped by a 14-karat gold horse and rider and horseshoe-shaped wreath handles. In 1997 the 18-karat gold horseshoe that adorns the trophy, which had been faced downward since its creation in 1924, was turned 180 degrees. Racing lore holds that the “luck will run out” of a horseshoe that is pointed down;
• The trophy took on added features for the 75th (1949), 100th (1974) and 125th (1999) runnings of the Kentucky Derby. Each of those trophies included a mantle of “roses” fashioned from rubies and emeralds, along with a horseshoe filled with diamonds. Similar additions are planned for the trophy presented at the 150th running of the Kentucky Derby in 2024;
• It took an estimated 2,000 man-hours for artisans to create the trophy;
• Richline also creates three smaller, sterling silver replica trophies that are presented to the winning Kentucky Derby trainer, jockey and breeder.

This is an edited press release.