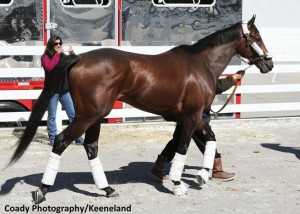 Sunday, Nyquist flew to Lexington, Kentucky and Keeneland Race Course where the undefeated son of Uncle Mo trained by Doug O’Neill for Paul and Zillah Reddam will do the majority of his training prior to the 2016 Kentucky Derby at Churchill Downs on May 7.

“My crew said he looks great,” O’Neill said by phone from his home in Santa Monica on Sunday morning. “So far, so good. He’ll train at Keeneland and ship to Churchill about a week before the Derby.”

Nyquist won the Florida Derby under regular rider Mario Gutierrez who won the 2012 Kentucky Derby with I’ll Have Another and Team O’Neill.

“You’re always surprised when your horse wins as easy as he did,” O’Neill said. “But as quick as he broke and with an easy run to the first turn, we were very optimistic at that point.

“It unfolded perfectly, and 100 percent credit for that goes to Mario and Nyquist. Horses came to him, challenged him and definitely went at him. It was no pedestrian trip, but all that should help us down the road when there’s a full field in the Kentucky Derby.”

Tom Knust, the agent for Gutierrez, obviously has a vested interest, but the former Racing Secretary and a race tracker for 48 years cited three reasons for the dazzling performance by Nyquist in the Florida Derby.

“He’s a great horse, Doug did a great job training him up to the race, and I thought Mario rode a great race,” Knust said. “You can’t ask for any more, that’s for sure.

“This next five weeks will be real exciting. Paul and Zillah Reddam are really good sportsmen. They had no problem going to Florida to run. Mohaymen is a great horse and probably had his excuses Saturday.”

Nyquist is now training at Keeneland Race Course in Lexington, Kentucky and will be there until about 10 days before the Derby when he will take the 90 mile drive to Churchill Downs.