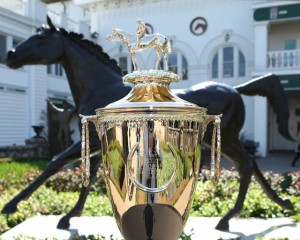 The coveted solid gold 2017 Kentucky Derby Winner’s Trophy has arrived at Churchill Downs Racetrack and now awaits its formal presentation to the owner of the 3-year-old Thoroughbred that is victorious in the 143rd running of the Kentucky Derby Presented by Yum! Brands (Grade I) on Saturday, May 6.

The 14-karat gold trophy – a prize that is deemed “priceless” by the historic racetrack that presents it and the owners, trainers and jockeys who pursue it – will have a secure home in the Kentucky Derby Museum, located adjacent to the racetrack, until the running of the Derby. The prize will make a round of public appearances prior to the running of the Kentucky Derby, after which it will be presented to the owner of the 3-year-old Thoroughbred that wins the famed race known as the “Run for the Roses.”

The 2017 Kentucky Derby Winner’s Trophy and three smaller sterling silver replica trophies that go to trainer, jockey and breeder of this year’s winner were delivered to Churchill Downs on Wednesday by representatives of S. R. Blackinton, the Smithfield, R.I. company that annually crafts the coveted prize. President/Designer Susanne Blackinton-Juaire and her husband, Bill Juaire, represented their company’s artisans as they traveled to Kentucky to deliver this year’s trophy.

Susanne Blackinton-Juaare is a fifth-generation silversmith whose family entered the profession in 1862 – 12 years before the first Kentucky Derby was run in 1875 at the track originally known as the Louisville Jockey Club. The company’s artisans have crafted each Kentucky Derby Winner’s Trophy since 1975.

“It is a thrill each year for the members of our team that craft the Kentucky Derby Winner’s Trophy, and also a very emotional experience,” Blackinton-Juaire said. “Each individual connected to this coveted trophy takes great care and pride throughout the five-month process during which each year’s trophy is crafted. We’re sad to see it leave each spring for its journey to Churchill Downs, but it is exhilarating for each of us when we witness the joyful moment on the first Saturday in May when this wonderful trophy is presented to the owner of the Kentucky Derby winner.”

The trophy’s design took on added features for the 75th (1949), 100th (1974) and 125th (1999) renewals of the Kentucky Derby. Each of those trophies included a mantle of “roses” fashioned from rubies and emeralds, along with a horseshoe filled with diamonds. Similar additions are planned for the trophy of the 150th running of the Kentucky Derby in 2024