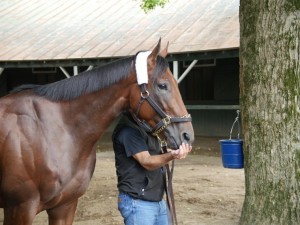 Triple Crown winner American Pharoah has landed in Saratoga, New York and is getting ready for the Travers Stakes this weekend. Saratoga Race Course will be the place to be as horse racing fans from all over the world will be watching this weekend.

A NYRA press release told everyone about his trip along with connections quotes. Led by a New York State police escort, saluted by fans during his trip and greeted by a throng of media and well-wishers, American Pharoah arrived at Saratoga Race Course shortly before 3 p.m. ET Wednesday to begin final preparations for Saturday’s Grade 1, $1.6 million Travers.

Accompanied by Jimmy Barnes, assistant to Hall of Fame trainer Bob Baffert, exercise rider George Alvarez and groom Eduardo Luna, Zayat Stables’ American Pharoah was walked around the courtyard of trainer John Terranova’s barn, given a bath and posed for pictures before being led into his stall.

“It was actually a fairly quick trip, 12 hours stall-to-stall,” Barnes said. “Traveling with the Pharoah, they make it very convenient for us. We’re the last one to show up to the plane and the first one off. Everybody has been very cooperative with that. He handles shipping very well. He’s shipped so many times, he’s a pro.”

Barnes was unsure if or when American Pharoah would train on Thursday, but he expects the chiseled bay son of Pioneerof the Nile to gallop 1 ½ miles over the main track on Friday. Much like Churchill Downs does for Kentucky Derby and Oaks contenders, a special time period will be open to Travers contenders only from 8:45 – 9 a.m.

“He adjusts. He’s probably adjusted right now; you could lead him over and run him,” Barnes said. “I really think he adjusts very easily. We’d like to get him over the track. He likes a deeper-type track, so this track should be fine.”

Barnes said a large reception was waiting for Team Pharoah when they arrived at Albany International Airport just before 2 p.m. EST. The drive north on Interstate 87 saw motorists pulling over and a group of fans cheered and waved as the motorcade went past a rest stop midway through the trip. A vase with a dozen red roses, sent by a fan, was waiting on a table in the barn courtyard.

“We’re used to it. This is just how it is when you travel with the Pharoah,” Barnes said. “You just really have to enjoy it because he’s only going to be around so long, and when this is all over I’m sure we’re going to miss him. At times it gets a little hectic, but you’ve just got to sit back and just enjoy it. You’re blessed to be here.”

American Pharoah is attempting to become just the second Triple Crown winner to add the Travers, following Whirlaway in 1941. Gallant Fox was second to 100-1 long shot Jim Dandy in 1930, and Affirmed finished first in 1978 but was disqualified to second behind arch-rival Alydar for interference on the backstretch.

“This is such a prestigious place to come to, and the Travers is such a big race. It would really mean a lot for us to win this race,” Barnes said. “We’ve tried several times. Point Given was the horse that we brought here that really had a good chance of winning, and he did. Some of the other horses … we probably just picked the wrong spot at the wrong time. Now, we’re in the right spot.”