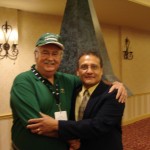 Lane is a fixture in Kentucky basketball history and has dedicated his life to the youth of central Kentucky and will receive the Jim Host Youth Sports Award. Previous winners include Martha Layne Collins, Louis Stout, Dave Kerchner, Don Adkins and Mike Fields.

Ken and Sarah Ramsey own Ramsey Farm and have multiple graded stakes winners, three Breeders’ Cup winners, and the Ramseys themselves have won multiple Eclipse Awards for outstanding owner and breeder. Many of their race horses have names incorporating the word “Kitten”, Ken’s nickname for Sarah. Previous winners are Bill Farish, Mitch Barnhart, Alan Stein, Jerry Carroll and Ted Bassett.

Larry Collums will receive the Tom Hammond Sports Media Award which is a national award presented to a broadcaster who has achieved outstanding accomplishments in the field. Collmus joins previous winners Dick Enberg, Marty Brennaman, Cris Collinsworth and Larry Conley.

At age 16, Reed went to work for the Lexington Herald-Leader for a six-year span. By the time he was a senior in college, he was the assistant sports editor before moving on to an opportunity at the Courier-Journal in Louisville in 1966. Reed went on to work for Sports Illustrated in New York where he spent four years before returning to the Courier as a special projects writer. The first special project was to investigate the thoroughbred racing industry for which he received national recognition. Reed returned to sports writing and was the sports editor for the Courier from 1977-86 and was a senior writer for Sports Illustrated for 30 years. He’s worked as an adjunct professor at Indiana University and was an executive scholar in residence at Georgetown College.

“Billy Reed has spent his lifetime writing about sports both in our state and nationally,” said Hammond. “He has established himself as one of the most accomplished journalists in Kentucky’s history.”

Each Derby, Billy Reed gives Kentucky Derby Tours member his thoughts on the Oaks and Derby at our Breakfast Oaks morning. Congratulations on your award Billy!

The event will consist of a reception with award winners and keynote speakers, a sit-down dinner and awards program. For more info or to purchase tickets, please call 859-286-5156. Edited press release