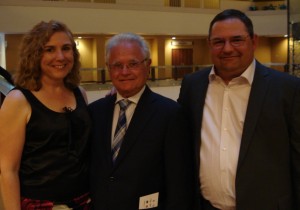 The 2016 Big Sport of Turfdom – recognizing a person or group of people who enhance coverage of Thoroughbred racing through cooperation with media and racing publicists – has been awarded to trainer Art Sherman, the Turf Publicists of America (TPA) announced today.

Sherman, the trainer of all-time North American earnings leader California Chrome, won in a vote determined by the nearly 150 active members of the TPA, a trade organization of Thoroughbred racing publicists and marketing executives.

“I am so delighted and honored to be among the people that have won this award, a who’s who of racing,” Sherman said. “I’ve always tried to be accommodating to the press and even anyone that asks me for an autograph. It’s for the betterment of the game. Anything for racing.”

Under Sherman’s care, California Chrome has won 15 of 25 starts while amassing $14,452,650 in earnings across four seasons. As a 3-year old, the modestly bred son of Lucky Pulpit won the 2014 Kentucky Derby and Preakness Stakes en route to Horse of the Year and Champion 3-Year-Old honors. This year, California Chrome won three Group 1 or Grade 1 races, including the $10 million Dubai World Cup, and was second in the $6 million Breeders’ Cup Classic.

“Art Sherman is a publicist’s dream,” said TPA President Jim Mulvihill. “For three years he has trained one of the top horses in the world and during that span has made himself available for thousands of interviews. His genuine nature and likability have been major factors in California Chrome becoming one of the most popular racehorses of our time.”

The Big Sport of Turfdom will be presented to Sherman at the University of Arizona Race Track Industry Program’s annual Awards Luncheon on December 6, emceed by Santa Anita Park track announcer Michael Wrona. The luncheon is part of the 2016 Symposium on Racing & Gaming at Loews Ventana Canyon Resort in Tucson, Ariz.

The Awards Luncheon is included in registration fees for the Symposium. Additional information about the luncheon may be obtained by contacting TPA Secretary/Treasurer Dave Zenner at [email protected]