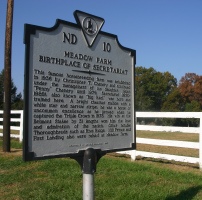 The birthplace of 1973 Triple Crown champion Secretariat was named to the Virginia Landmarks Register by the Virginia Department of Historic Resources it was revealed by press release today.

Known as the Meadow Historic District, the designation includes the foaling shed where Secretariat was born on March 30, 1970; his training barn, where he wore his first saddle and bridle; the yearling barn where he stayed as a colt; and a yearling barn annex, stallion barn, horse cemetery, well house and pump house. Most of the structures were built in the 1930s by Christopher T. Chenery, the founder of Meadow Stable. They are located in Caroline County, in what is now known as The Meadow Event Park, owned by the Virginia Farm Bureau Federation.

The press release continued, Secretariat’s record-shattering Triple Crown victories earned him the title of “America’s Super Horse” and remain unsurpassed to this day. ESPN named him among its top 50 athletes of the 20th century, and TIME, Newsweek and Sports Illustrated featured him on their covers. Secretariat transcended his sport to attain hero status in the popular culture of the time. The big red stallion, owned and raced by Penny Chenery, was beloved by millions, regardless of whether they knew anything about horses or horse racing. In recent years, his enduring popularity has enjoyed a resurgence due to the Disney feature film Secretariat.

“I am deeply honored that the birthplace of Secretariat is now listed on the Virginia Landmarks Register as the Meadow Historic District,” Penny Chenery said. “This designation is a fitting tribute to the land, our horses and my father’s legacy.”

VFBF President Wayne F. Pryor said that organization “is extremely pleased about this important historic designation for the birthplace of Secretariat at The Meadow. We are proud to be the stewards of the Virginia farm that produced an American legend, and we invite all fans of Secretariat to come visit.”

Leeanne Meadows Ladin, Secretariat tourism manager at The Meadow Event Park and co-author of Secretariat’s Meadow – The Land, the Family, The Legend, said, “We definitely will be celebrating the Meadow historic designation at the Secretariat birthday event next week.” Ladin coordinated the research and documentation for the nomination process. She noted the substantial support of the George Washington Regional Planning Commission, planners Diana Utz and Danny Reese, historic preservationist Eden Brown and the Caroline County Department of Economic Development and Tourism throughout the nomination effort.

Meadow Stable produced many notable Thoroughbreds in addition to Secretariat. Outstanding but overshadowed was Riva Ridge, who won the 1972 Kentucky Derby and Belmont Stakes. In 1971, his winnings saved Meadow Stable from the auction block when Penny Chenery’s family was pressuring her to sell the farm and all the horses. Other champions include Hill Prince, 1950 Horse of the Year; First Landing, sire of Riva Ridge; Sir Gaylord, 1962 Kentucky Derby contender; Cicada, top money-winning filly of the 1960s; and the great broodmares Somethingroyal, dam (mother) of Secretariat; Hildene; Imperatrice; and Iberia, to name a few.