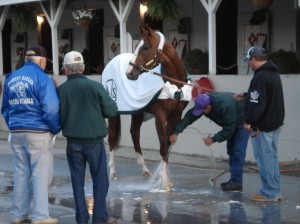 This story was written by Alexis Garske and sent out through the Del Mar media department.

It has been a year of ‘firsts’ for trainer Art Sherman and California Chrome and their ensuing journey is no different.

“I’m ready now.” The very words Art said to me just days before the Kentucky Derby after watching a short film in the Derby Museum not far from the actual finish line at Churchill Downs. The film attempts to capture the Derby’s rich history and tradition in all its glory and it does just that. The culmination is the stretch run from the previous year on a surrounding screen high above your head, complete with sounds of climactic race calls and screaming fans.

Sitting in silence, we all envisioned the impossible, daring to hope that California Chrome could be this year’s edition. When it finished some had tears in their eyes; the enormity of that moment wasn’t lost on any one of us.
After a moment Art stood, fixed his collar and turned around with a smirk. When I asked what he thought, his response, without missing a beat, “I’m ready now.” He knew what was next. Two days later, California Chrome won the Kentucky Derby.

The simple phrase showed me everything I ever needed to know about Art Sherman. It was as if everything up until that moment had been a rehearsal and opening night had arrived. Just when we thought the pressure had become too much or the media had become too loud, he was ready to perform and so was his horse.

Perform they did. Along with son Alan, groom Raul Rodriguez, exercise rider Willie Delgado and of course, ‘Chrome’, Art and the team became the classiest bunch of ‘Cal-breds’ to ever grace the stage.

As a member of the team for much of the Triple Crown I was privy to many of these moments. As the member who was there to handle the media onslaught, I learned quickly that the best of Art wasn’t even in front of the camera, it was often behind it.

Through months of madness, Art, his crew and his very popular chestnut, managed to maneuver through many ‘firsts’ together and emerge better than ever and looking ahead to what’s next. For Art, at 77, that’s never been a problem, but he’s still taking it one race at a time.

That next race is the Grade I, 1 1/8 miles, Hollywood Derby at Del Mar Saturday, on the grass. For Chrome, there isn’t a better time, or a better place to try the new surface. “There’s something about Del Mar, he’s a different horse here,” Sherman says as he keeps a close eye on his champion while he watches him cool out last Tuesday morning, “He’s so versatile. He’s run on all different surfaces; I think one more would be the ultimate.

“I’ve always thought he could be good on grass. He’s so efficient; he doesn’t have any wasted motion. So far, he floats over it.

“It’s also an opportune time, it’s against straight three-year-olds and next year we’ll be wide open. If he can lay close on the grass, with his kick coming home, that means a lot. It really means a lot.”

There are those that question whether he is still the same horse that he was in May. Even a strong finish in the Breeders’ Cup Classic created questions, but Art has the answers. “I wish I had gone into the Breeders’ Cup like we’re coming into this race. I didn’t get the race I wanted him to have in Pennsylvania, he was too covered up, it wasn’t the race he really needed. With another work, there’s no doubt he would have won the Breeders’ Cup.”
There is no one happier that a four-year-old campaign seems imminent either. “I’ve always wanted to keep him racing and I’m glad we didn’t sell him; we’ve got another year with him. I think he’ll be one of racing’s best handicap horses. He’s not a boy anymore, he’s a man. I think you’ll see a different horse next year.

“Chrome’s the people’s horse. He has a demeanor that’s unbelievable. I couldn’t have done all this with another colt. He’s got charisma, he thrives on the attention. Other horses would go crazy if they had to deal with what he’s dealt with.”

When asked why success on grass would be so valuable Sherman offers, “This will give us another dimension. I’ve been to lunch with Ascot representatives and they’d love to have us. I could go to England, I could meet The Queen. My jock’s already met her, so I’d like to.

“It gives me another plan of attack because it gives us so many more options throughout the year. We can plan out the whole year.” The Breeders’ Cup at the end of next year is still the goal when you talk to Sherman, but this year’s ending is still the most important thing right now.

“I think a win here puts Chrome in the conversation for Horse of The Year. This would give him four Grade I wins. I may be biased but I think he’ll deserve it; we’ve been all over the country. I’ll have him ready for this race.”

By all accounts, He’s ready now.