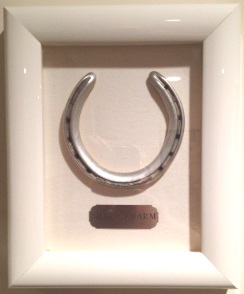 Not quite Florida or a cottage by the sea but 1997 Kentucky Derby winner Silver Charm retired to Kentucky this week. Silver Charm won 12 of his 24 career starts with almost $7 million in earnings. He raced for owners
Robert and Beverly Lewis and trainer Bob Baffert and rose to national prominence in the spring of 1997, winning the Kentucky Derby and Preakness Stakes.

Silver Charm’s Triple Crown dreams almost came true but he came up short when he finished second to Touch Gold in the Belmont Stakes. He continued to race in 1998 and won the Dubai World Cup and finished second in the Breeders’ Cup Classic. He was inducted into the Hall of Fame in 2007.

Silver Charm retired to stand at Three Chimneys Farm in Midway, Ky., for the 2000 season. He was sold to the Japan Bloodhorse Breeders Association to stand in Japan beginning in the 2005 season. He was first at Shizunai Stallion Station on the island of Hokkaido, and later at the JBBA’s satellite facilities.

He was sold with a buy-back clause in his contract, and Three Chimneys and the Lewis family had set up an endowment to ensure the horse’s long-term care.

Silver Charm’s flew from Hokkaido Japan with a stop in Anchorage, Alaska. Then it was on to Chicago where he spent 4 days in a quarantine facility at Arlington Park. He was then driven by van to Kentucky.

“[We] are thrilled and proud to have Silver Charm returning to America and beginning his retirement at Old Friends Equine,” the Lewis family said in a statement. “The racing thrills and excitement that he brought to our lives will never be forgotten. … We hope that Thoroughbred racing fans from around the world will enjoy visiting Old Friends and saying ‘Hello’ one of America’s great racehorses.”