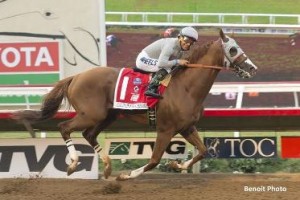 The past weekend of holiday racing made for some light jostling in the order of the top-ten resulting with Frosted (249) dropping from second to fifth in the rankings after being defeated in the GI Woodward Stakes at Saratoga where he finished a respectively third.

Mark Casse trainee Tepin moves back into second with (338) while Flintshire moves up from fourth to third (319) for trainer Chad Brown who earned his first-ever training title at Saratoga Race Couse while setting the record for most wins during a meet with 40. It is anticipated that Flintshire’s next start could come in the GI, Joe Hirsch Turf Classic Invitational on October 1 at Belmont Park.

The undefeated 3-year-old filly Songbird, (306) with a perfect total career of ten starts with ten wins moves up a notch from to fifth place. The Eclipse Award champion could possibly make her next start in the G1 Cotillion Stakes at Parx Racing, September 24.