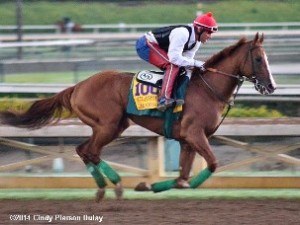 California Chrome, the 2014 Kentucky Derby and Preakness champion who finished third in Saturday’s $5 million Breeders’ Cup Classic, will race as a 4-year-old and forego, at least for now, a lucrative career at stud. This report is from Reuters reporter Steve Ginsburg yesterday.

Coburn, who co-owns the horse with Perry Martin, said he would choose the races California Chrome will run in 2015 very carefully.

“The future is good because we’re going to race him as a 4-year-old,” Coburn told Reuters in a telephone interview. “We’re going to be very choosy in the races we’ll put this horse in. There’s no sense in taking a chance of hurting him.”

The modestly bred 3-year-old colt won the Kentucky Derby and Preakness but finished fourth in the Belmont Stakes, failing in his bid to become the first Triple Crown winner since Affirmed in 1978.

After the Belmont disappointment, California Chrome took more than three months off and would start just once prior to the Classic, finishing sixth as the odds-on favorite in the Pennsylvania Derby on Sept. 20.

Coburn, 62, said he was not worried about missing out on Chrome’s big-money potential as a stud because the upcoming campaign would make him more valuable.

California Chrome, ridden by Victor Espinoza, broke from 13th post in the 14-horse Classic on Saturday and fought gamely in the stretch to finish a half-length behind the two front-runners, Bayern and Toast of New York.

“The stretch run was fantastic,” said Coburn. “He only got beat by half a length. He was coming on like a freight train. If the stretch run had been 10 yards longer, he’d have probably won by three lengths.”

Coburn said his California-bred colt emerged from the 1 1/4-mile race at Santa Anita in perfect shape.

“He came out of the race just absolutely fantastic,” said Coburn. “We saw him yesterday (Sunday). He looked like he could run the race all over again. He was really, really high in spirits.”

California Chrome would have been the favorite for Horse of the Year honors with a victory on Saturday but Coburn remained enthusiastic about his chestnut colt.

“He proved on Saturday that he’s a race horse,” he said. That’s what he does. We can’t wait for the future. We’re going forward.”