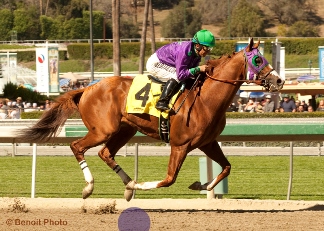 Art Sherman knows what it takes to get a horse to the Kentucky Derby and win. He had a close-up view as an 18-year-old workout rider when Swaps won the 1955 Run for the Roses. Nearly 60 years later, Sherman is taking his own colt to Louisville as the early Derby favorite.

California Chrome romped to a 5 ¼-length victory in the $1 million Santa Anita Derby on Saturday, a race Swaps won by a half-length before he went on to Kentucky Derby glory.

“He’s my Swaps,” said Sherman, now a 77-year-old trainer assisted by his son Alan. “I’m very humbled to have a horse like this.”

California Chrome has won his last four races by a combined 24 1/4 lengths for Sherman, a former jockey who has been in racing for 50 years but has never had a horse as good as this one.

“Right now, he’s kind of freaky and I’m enjoying it,” Sherman said. “I can’t believe the races I’ve been seeing.”

Rebel Stakes winner Hoppertunity returned $4 and $2.60, while Robert Lewis Stakes winner Candy Boy was another 3 ½ lengths back in third and paid $2.40.

California Chrome earned 100 points for the victory, giving him 150 to move atop the leaderboard in the system used by Churchill Downs to determine the 20-horse field for the May 3, 2014 Kentucky Derby.

Hoppertunity, trained by three-time Kentucky Derby winner Bob Baffert, earned 40 points and now has 95, putting him sixth in the standings.

“I got beat today but I’m really happy with my horse,” said Baffert, who confirmed Hoppertunity is headed to Louisville for the Derby.

“We’d like to race on,” his trainer John Sadler said. “We’ll see where the points fall and if 30 points gets us to move on, we’ll move on. We think our horse likes distance.”

California Chrome broke a step slow and was crowded in the early going. He went between horses to challenge for the lead with early pacesetter Dublin Up. California Chrome took command nearing the quarter pole and kicked clear without Espinoza needing his whip, widening his lead as he thundered down the stretch.

Espinoza was surprised when California Chrome didn’t bolt out of the starting gate.

“He’s calm and focused, but for some reason we missed the break a tiny bit,” said Espinoza, who won the 2002 Kentucky Derby aboard War Emblem. “The most important thing for me was to have a clean run to the first turn and after that it was easy for me.”

California Chrome’s owners recently turned down a $6 million offer from a bloodstock agent to buy 51 percent controlling interest in the colt. He has six wins from 10 career starts and earnings of $1,134,850.

“They wanted control of the horse. I said we want to keep the trainer and run in our colors, and they said no,” co-owner Perry Martin of Yuba City, Calif., said. “Then it was very simple and we said, `No, thank you.'”