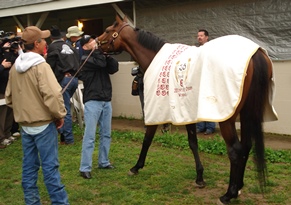 Calvin Borel kissing Mine That Bird the morning after the Derby

“He was like a matador in a bullring in Madrid, so confident and yet so open,” Ulrich said. “As an actor, I thought he did an incredible job.”

“Calvin’s acting performance was brilliant,” Kane said. “He’s nothing but charisma. He walked into someone else’s playground and just nailed it.”

The name of the movie, ’50-1” came from the odds that horse racing fans set when the horses entered the gate at Churchill Downs as the 2009 Kentucky Derby started.

Director Jim Wilson said watching the rider in post-race interviews led him to eventually pursue Borel for the film. “I first thought we would get an actor to play Calvin,” Wilson said. “One, he’s riding, and two, it’s such a big part. It’s very difficult to play yourself, much more difficult than people think. But looking at footage of Calvin talking and doing press, I thought Calvin has to play Calvin.”

“I couldn’t go if I had a big race, so it took a little longer than it should have,” Borel said, noting Wilson’s willingness to work with his schedule. “It was an awesome experience. It was pretty cool. I got to be myself. I didn’t have to play another person, so it was more or less in the jocks’ room, and riding in the race, and being on the backside before and after the scenes. I was in my home, my second home.

“One thing about the movie, I think it’s going to be real,” Borel said. “If you know anything about horses, you’re going to see a lot more of what really happens [behind the scenes in racing]. Of course, I can’t say what happens. But I think people will really like that.”

“It was an amazing race,” Borel said. “I was last the whole way. And that was our plan, to be back there. Not that far back, but back. When I turned for home, I kind of squeezed on him a little bit, and really I had a wall of horses and had so much horse under me. It was just, ‘Calvin, find you a spot and go ahead do your job,’ and that’s all I did. The rail opened up – not wide, a very small hole – and I pointed him to it and he went on, and got the job done.

Mine That Bird, who is said to have a cameo in the movie, will be making other appearances in conjunction with the film. He’s scheduled to be in Dallas on April 5; at the Kentucky Derby Museum at Churchill on April 17; and at Keeneland on April 18.