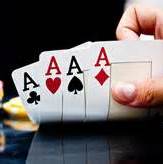 It was an evening of intrigue, excitement and promise as more than 200 supporters of the California Retirement Management Account (CARMA), a nonprofit dedicated to funding Thoroughbred aftercare, gathered at the Hilton Del Mar Hotel on Saturday, July 16 according to a Santa Anita Park press release. The “Chips All In” charity poker tournament raised more than $86,000 to help the organization provide financial aid to more than 20 nonprofits which rehabilitate, retrain and rehome off-track-thoroughbreds.

At the conclusion of social hour, the ballroom doors opened and the Texas Hold’em poker tournament began. Participants and spectators hearts raced as the stakes grew with each hand. This year’s winner was Paul Martino, who won a weekend stay at the Mandalay Bay Resort & Casino along with dinner and theater tickets generously donated by MGM Resorts International.

“This is our final CARMA Cares poker tournament, so we’re very happy to have it go out on a high note,” said Executive Director Lucinda Mandella. “We’ve had a great nine year run with this event, but we’re looking forward to bringing something new to our supporters next year.”

Event proceeds were generated through sponsorships, ticket sales, donations and the silent auction. CARMA will use the funds to directly support its 501c3 aftercare partners and to help promote thoroughbreds in second careers. After such a successful fundraising event, CARMA is looking forward to the 2016 grant process, which begins in September. 2016 grants will be presented in December, during the Santa Anita Park Winter Meet.