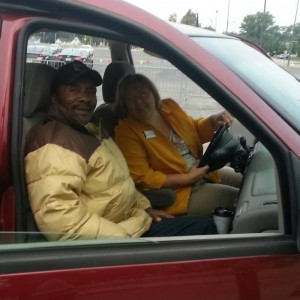 Charlie Davis with Julie Henry from the Kentucky Derby Museum

Charlie Davis, the charismatic exercise rider for 1973 Triple Crown winner Secretariat, died from complications of lung cancer. He was 78. Davis, who was born on Feb. 2, 1940, in Orangeburg, S.C., started his vocation by cutting elementary school to watch the Thoroughbreds train on the farm where his father worked. Small in stature but tough and determined, Davis learned how to exercise horses and eventually went to work for legendary trainer Lucien Laurin, becoming a member of the famed “Holly Hills” crew that also included storied groom Eddie Sweat.

Davis exercised some of the era’s top racing stars of the 1960s, including champion filly Quill and Belmont Stakes winner Amberoid. In 1971, when Laurin took over Christopher Chenery’s Meadow string, Davis was assigned as exercise rider for the stable’s champion colt Riva Ridge and later Secretariat. He continued exercising horses until 1981, when he was thrown and suffered a career-ending back injury. Davis later worked as a foaling manager for several farms in the Ocala, Fla., area, and was known throughout the industry as a well-rounded horseman.

In a recent interview with Tim Sullivan of the Louisville Courier-Journal, Davis reflected, “I just wanted to be Charlie, no more than the good Lord let me,” he said. “I don’t want to be more than what I is.”

Ron Turcotte, the Hall of Fame jockey who rode both Riva Ridge and Secretariat, said that Davis’ passing is a great loss for the Secretariat Team and for the sport of horse racing. “Charlie was a great friend to me personally and a great friend to the sport,” Turcotte said. “He and Eddie [Sweat] knew Secretariat better than any of us, and Charlie became a walking history book about those days. He was a wonderful exercise rider with a true horseman’s touch, and the achievements of both Riva Ridge and Secretariat were a result of Charlie’s work with them.”

Davis regularly made appearances at racing venues, the Secretariat Festival and other events to the delight of generations of fans, always willing to share stories of Secretariat and his first-hand experiences as a member of the Meadow Stable Team. Following the announcement of his cancer diagnosis last month, friends and fans rallied around Davis, raising funds to cover his medical expenses.

Davis is survived by his wife of 51 years, Caroline, as well as seven children and several grandchildren. His daughter, Katina Davis, said the family has been overwhelmed by the love and support they have received. “We are heartbroken that we lost him,” Ms. Davis said. “He was always so generous with whatever he had, especially his time. He loved talking about his days as an exercise rider, and he loved Secretariat. We are very grateful to all of his friends and fans who have offered messages of support and contributed to his GoFundMe campaign. That financial assistance has eased our worries as we cover Dad’s final expenses.”

Funeral services will be held at noon Saturday Feb. 17, at the Eutawville Community Funeral Home Chapel, in Eutawville, S.C. All are welcome to attend. Memorial contributions and written condolences may be sent to:
The Davis Family
P.O. Box 831072
Ocala, FL 34483

Davis never missed an opportunity to brag on his champion Secretariat, whom he simply called ‘The Man,’ yet always humble about his own undeniable contributions to the colt’s legendary success and content to stand in Big Red’s massive shadow.

“I’d like people to say about me, ‘I knew a guy that galloped Secretariat.’ That is good enough for me.”