The Jockeys and Jeans Fundraiser at Canterbury Park for injured riders saw a record amount of money donated. 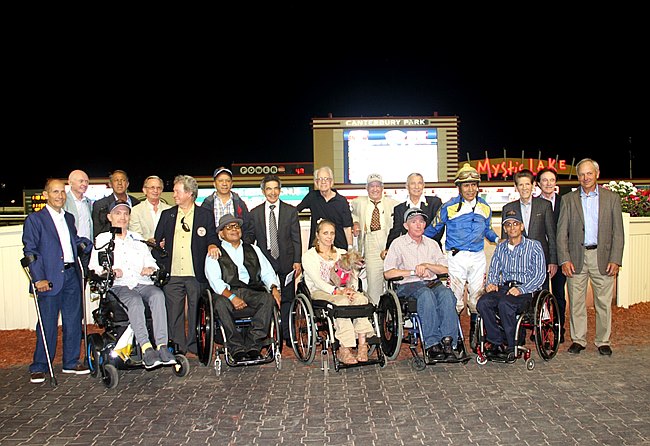 Results for the June 23 event are in and the group of former jockeys raised $310,000, easily topping the record $254,000 raised at Parx Racing last year. The total puts the amount raised by the group to well over $1 million.

“Jockeys and Jeans is a true representation of jockeys helping jockeys,” said PDJF Board President Nancy LaSala. “We thank the former jockeys who came together to do something to help raise awareness and funds for the PDJF, as well as the Hall of Fame jockeys who travel across the country and the active riders at each host track. All are there to help the fallen riders. We are so appreciative of the tracks who have hosted the event; Tampa Bay Downs, Indiana Grand, Gulfstream Park, Parx Racing, and Canterbury Park. Without their support this would not have happened.”

The PDJF makes monthly payments of $1,000 to 60 former jockeys who suffered catastrophic racing accidents with 40 either pari or quadriplegics. Most of the remainder suffered severe brain injuries.

The all volunteer group, Jockeys and Jeans came together for a jockey reunion at Tampa Bay Downs in early 2014 and decided to make it into a fundraiser and donate all proceeds to the Permanently Disabled Jockeys Fund. President Barry Pearl said this year’s sold out event is likely the richest single fundraiser in the history of Thoroughbred racing.

“While each of our nine committee members puts in a massive amount of work and Hall of Fame riders make the time to show up and take part, it is about more than us,” he said. “It’s about all those in the community of horse racing who stepped up to prove they genuinely care about former jockeys who lives were changed forever in a split second and are now riding wheelchairs instead of horses. And Canterbury Park just took the lead among tracks that care. Randy Sampson and the team there were as innovative as they were determined to make this event a success.”

The track solicited event sponsors and held a poker and golf tournament in which Hall of Fame riders participated. Thirteen attended to honor six permanently disabled jockeys. Edgar Prado flew from his Maryland base to compete with other successful riders and six of the track’s past leading riders in the first All Star Jockey Challenge. Prado, who leads the eight active Hall of Fame riders in victories with over 7,000, got up in the final stride to win aboard Superstar Bea. Barry Butzow, the horse’s co-owner, donated his share of the purse, bringing the total raised in the race to $19,000.

Jockeys and Jeans is officially announcing that its 2019 annual fundraiser is set for Santa Anita and in 2020 will move to Churchill Downs.