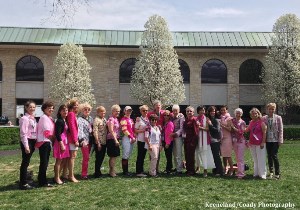 As we blogged last week, Keeneland was all set to host “Ladies of the Turf” on Sunday, April 13 as a fundraiser for Kentucky First Lady, Jane Beshear’s charity Horses and Hope and the Permanently Disabled Jockeys Fund. We thought you would enjoy this press release from Keeneland about the event and the jockeys present.

Today’s events included a presentation and video tribute following the second race, won by Napravnik. The women also participated in an autograph signing featuring a commemorative poster created by noted cartoonist Peb. Proceeds from the sale of the poster raised $1,000 for Horses and Hope and the Permanently Disabled Jockeys Fund.

Keeneland’s recognition of the Ladies of the Turf was part of Horses and Hope Pink Day. Horses and Hope is First Lady Jane Beshear’s initiative to raise awareness of breast cancer among women working in Kentucky’s horse industry. Mrs. Beshear participated in a lunch for survivors at the Keeneland Sales Pavilion, and participants enjoyed afternoon activities at the track.

The sixth race was the $60,000 Horses and Hope Race, and the nine horses wore pink saddle towels. The winner was G. Watts Humphrey Jr.’s Frivolous, who won the 1 1/8-mile race by 4¼ lengths. James Graham rode Frivolous for trainer Vicky Oliver.”