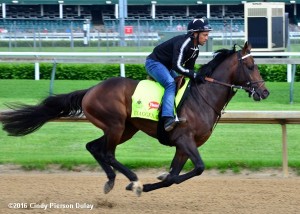 Kent Desormeaux knows Pimlico like the back of his hand, probably the front, too.

In 1989, he rode a staggering 598 winners, most of them in Maryland and 185 at Pimlico, breaking Chris McCarron’s 15-year record for most wins in a year.
Desormeaux’s mark still stands.

He missed capturing the 1998 Triple Crown by a nose on Real Quiet in the Belmont, a race Kent says he has watched replays of a thousand times “and every time I still think I’m going to win it.” Call it the worst beat in racing.

Desormeaux, born in Maurice, Louisiana, has a homecoming of sorts Saturday at Pimlico, where he rides Kentucky Derby runner-up Exaggerator in the 1 3/16-mile Preakness Stakes for his older brother, Keith, who trains the colt.

“Pimlico is like my home away from home,” Desormeaux said. “It’s like my backyard. I’m going to be so comfortable. I know all the streets, I know how to get from Washington, D.C. to North Baltimore, and that translates to the race course.

“I know every grain of sand out there and the nuances of how to ride the race track. I’ll just take that wisdom to the Preakness. The turns at Pimlico are sharper than most tracks and the straights are longer than most tracks, but it’s still the same circumference.

“And if the turns actually aren’t sharper, they ride sharper.” As for strategy, Desormeaux is not about to reinvent the wheel. “Keep it simple, stupid,” he said.

In a TVG interview Thursday, Keith commented on Exaggerator. “He looks like he’s not only re-gained that loss of weight (from the Derby) but he put on a few (pounds). He looks very nice. He reminds me of a modern horse. He’s not big and rangy like those throw-back horses.

“I’m focused on getting him and keeping him as fresh as possible and I think I’ve done that. He’s coming out of his skin. The numbers are the numbers. If I went by the numbers then why would I be here today?”

Post time for the $1.5 million Preakness is 3:45 p.m. Pacific Daylight Time. It will air live on NBC-TV and the Horse Racing Radio Network. Above is a Santa Anita Racetrack Press release.