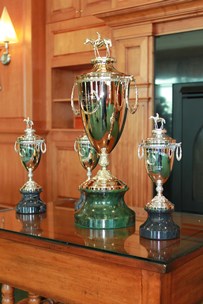 The priceless 2015 Kentucky Derby trophy is shown alongside the three smaller sterling silver replica trophies that will be presented to Kentucky Derby 141’s winning trainer, jockey and breeder.

The priceless trophy was crafted for the 40th consecutive year by a team of artisans from New England Sterling in North
Attleboro, MA, which has since been purchased by Richline, a subsidiary of Berskhire Hathaway Inc. Susanne Blackinton-Juaire, a fifth-generation silversmith and a member of the team that created the trophy, was at
Churchill Downs and bought the trophy for display.

“We typically start working on it in the fall,” Blackinton-Juaire said. “There’s a whole series: there’s the gold cup, the silver cups and the we go on to the Kentucky Oaks trophies that we simultaneously work on. The gold (Derby winner’s) cup typically gets finished first to make sure all is good and we hold on to it a bit. We finished it up just a couple of weeks ago.”

KENTUCKY DERBY TROPHY QUICK FACTS
The 14-karat gold trophy topped by horse and rider was created by New England Sterling of North Attleboro, Mass., which has produced the hand-crafted trophy since 1975,
New England Sterling is owned by Richline, a subsidiary of Berkshire Hathaway Inc.,
The handcrafted trophy’s standard design was commissioned by legendary Churchill Downs President Col. Matt Winn for the “Golden Anniversary Derby” in 1924,
The Kentucky Derby Winner’s Trophy is 22 inches tall and weighs approximately 65 ounces, excluding its jade base,
The trophy is topped by a 14-karat gold horse and rider and horseshoe-shaped wreath handles,
In 1997 the 18-karat gold horseshoe that adorns the trophy, which had been faced downward since its creation in 1924, was turned 180 degrees. Racing lore holds that the “luck will run out” of a horseshoe that is pointed down,
The trophy took on added features for the 75th (1949), 100th (1974) and 125th (1999) runnings of the Kentucky Derby. Each of those trophies included a mantle of “roses” fashioned from rubies and emeralds, along with a horseshoe filled with diamonds. Similar additions are planned for the trophy presented at the 150th running of the Kentucky Derby in 2024,
The Kentucky Derby Winner’s Trophy has been created by New England Sterling in North Attleboro, Mass. since 1975,
It took an estimated 2,000 man-hours for New England Sterling artisans to create the trophy,
New England Sterling also creates three smaller, sterling silver replica trophies that are presented to the winning Kentucky Derby trainer, jockey and breeder and
The engraved Kentucky Derby winner’s trophies will be presented during a ceremony in the regular winner’s circle at Churchill Downs on Saturday, June 13.