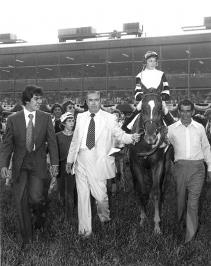 Larry, Laz, Affirmed with jockey Steve Cauthen aboard and groom Juan at the Preakness 1978

I heard this week that Larry Barrera passed away at the young age of 54. Larry was the son of Laz Barrera, 2 time Kentucky Derby winning trainer (Bold Forbes and Affirmed). I met Larry and Laz Barrera at Santa Anita Park in Arcadia.

For many years, I spent early morning hours at the Santa Anita barns. When I would see Laz he always said “Jaaanie, we all go to the Weeners Circlee at Kentucky when my horse wins”. As my family and I had handled tours to the Kentucky Derby for years, most people still think Kentucky Derby when they see me.

I kept hoping things would break for Laz in Kentucky, then came 1976 and Bold Forbes. I was naïve enough to think I had time to stop at the Ladies room before going down to the Winners Circle – big mistake! In 1978, I did not make that mistake and enjoyed every minute of the festivities.

I have so many memories of both Derbies but after the Triple Crown races of 1978, Laz would always mention Larry to me.

Many people did not ever really know about how much Larry had to do with his father’s business and the two Derby winners at the time. Clive Gammon of Sports Illustrated wrote about Larry after the 1978 Derby – to quote “Once the horses had pulled up and were cantering back past the clubhouse, Larry Barrera was the first to reach him and Larry’s father was still working his way clear of a mob of well-wishers. By that time, Larry was on the track and catching hold of Affirmed’s reins. Steve Cauthen leaned down as Larry grabbed upward and they hugged. First Larry was leading the horse, then running alongside it as they neared the winner’s circle. Steve climbed down. The pair walked arm in arm, smiling, hugging again, in a last private moment before the TV cameras broke in. It was almost as if the two 18-year-olds had done it alone. Cauthen, rose-bedecked, face split with a grin, puckered cheeks, and young Barrera looking older, more contained, an elder brother despite their identical age.

Since just after Christmas, Larry Barrera had shared an apartment in California with Steve Cauthen. A lot of people at Churchill Downs last week expressed surprise that a youngster like Larry had been left in sole charge of several million dollars’ worth of colt; before his father’s arrival in Kentucky, he had looked after Affirmed for several days. They would have been less surprised had they known that two years earlier, Larry had taken similar care of Bold Forbes, his father’s 1976 Derby winner.”

RIP Larry, many of us DO remember you and your contribution to horse racing, the Kentucky Derby, and the Triple Crown.