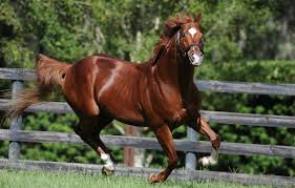 Leroidesanimaux, sire of 2011 Kentucky Derby winner Animal Kingdom will relocate to Lanwades Stud and Hallmarc Stallions in Newmarket, UK beginning in 2014 according to a recent press release.

Leroidesanimaux (Leroi) won 9 races from 13 starts on turf and dirt in USA and Canada over distances from 6 1/2f – 1m 1/2f, including the Citation Handicap, Atto Mile Stakes, and Frank E. Kilroe Mile Handicap. He was voted the Eclipse Awards champion turf male horse in the USA in 2005.

Leader of all stallions in the USA, as of June 22, 2013. Leroi headed the list followed by stallions such as Malibu Moon, Speightstown, Giant’s Causeway, Kitten’s Joy and Medaglia d’Oro.

Leroi has sired 108 winners of 253 races and $16,685,000 headed by US Champion 3-year-old Animal Kingdom, winner of the 2011 Kentucky Derby and this year’s Dubai World Cup, now at Arrowfield Stud in Australia before he will stand at Darley-USA in 2014.

Candy Stripes, sire of Leroidesanimaux, is a son of Blushing Groom and also sired American ‘Horse of the Year’ Invasor achieving a world class 10% stakes winners to runners rate.

Kirsten Rausing, owner and General Manager of Lanwades Stud, said: “We are delighted and very proud to welcome “Leroi” to Lanwades. He represents the reintroduction of the Blushing Groom sire line to the UK and with his pedigree, toughness and durability, marvelous racing form on both turf and dirt over distances up to 1m and 1/2f, , as well as his proven ability to sire World-class performers, he will be an immensely important addition to the European breeding industry. His pedigree makes him a suitable mate for mares by Galileo, Danehill and his sons, Mr. Prospector-line mares and others. It will be fascinating to breed him to daughters of Dansili! Leroi is the outcross stallion European breeders have been waiting for – and he is a proven stallion, too. We expect strong interest from mare owners throughout Europe”

“We are excited to have Leroidesanimaux continue his stud career at the premier stallion operation of Lanwades Stud. European breeders will now have the opportunity to breed to this significant sire line again” said Marc Haisfeld of HallMarc Stallions.

Leroidesanimaux, whose yearlings have made up to US $400,000 this year, will arrive at Lanwades in the near future and will be available for inspection from early November. His 2014 fee will be announced at a later date.