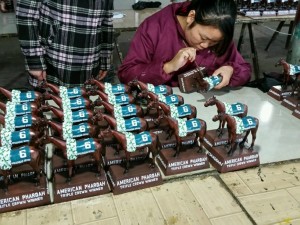 On the day Oaklawn kicks off its rich 3-year-old stakes series with the $150,000 Smarty Jones Stakes, the track will pay tribute to the greatest sophomore to come through Hot Springs with an American Pharoah Bobblehorse Giveaway. Fans attending the races Monday, Jan. 18, Martin Luther King Jr. Day, can receive the bobblehorse with a $2 donation to the Arkansas Racetrack Chaplaincy while supplies last.

American Pharoah won Oaklawn’s Rebel Stakes and Arkansas Derby en route to becoming Thoroughbred racing’s 12th Triple Crown winner in history and the first in 37 years after victories in the Kentucky Derby, Preakness and Belmont Stakes. He joins a prestigious list of Oaklawn horses immortalized in a bobblehorse, including Horse of the Years Curlin, Rachel Alexandra and Zenyatta.

Oaklawn’s 2016 promotions begin right out of the gate with the traditional $.50 corned beef sandwiches and $.10 soft drinks Jan. 16, the first Saturday of the season. On the second holiday Monday of the year, Presidents’ Day, Feb. 15, the 3-year-olds once again take center stage with the $500,000 Southwest Stakes and fans can win big during the $55,000 Progressive Cash Giveaway. Oaklawn will be giving away money after each race Presidents’ Day starting with $1,000 after the first race on through the 10th race when $10,000 is given away.

One of Oaklawn’s most popular promotions of the live racing season, the Boat and Truck Giveaway, returns Saturday, April 2. Guests can begin registering for the contest Saturday, March 19, $900,000 Rebel Stakes Day, and must be present April 2 to win.

Gates open every promotion day at 11 a.m. and the first race is 1 p.m.

Oaklawn’s 2016 live meet runs Jan. 15 – April 16 on a Thursday – Sunday basis. There is also racing on the two holiday Mondays and the first two Wednesdays in April. Gates open every race day at 11 a.m., except Arkansas Derby Day when they open at 10:30 a.m. For more information, visit www.oaklawn.com or call 501-623-4411. This is an Oaklawn Park Press release.