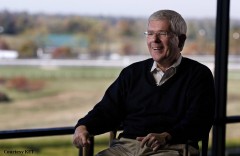 Mike Battaglia, one of horse racing’s great ambassadors, will be feted by the Kentucky Thoroughbred Owners with the organization’s prestigious Warner L. Jones Jr. Horseman of the Year Award it was announced by press release.

The Warner L. Jones Jr. Horseman of the Year Award recognizes individuals for outstanding contributions to Kentucky horse racing and sharing the passion for the industry exemplified by Jones, founder of Oldham County’s renowned Hermitage Farm and who spent 50 years on the Churchill Downs board, including eight as chairman during the iconic track’s resurgence. Jones was the inaugural winner in 1988, six years before his death.

Battaglia, a lifelong Kentuckian, has authored the morning line for Churchill Downs and Keeneland since 1974 and was the oddsmaker at Latonia (now Turfway Park) before that. He was Churchill’s track announcer from the fall of 1977 through 1996 and continues to call the races at Turfway, a post he started in 1972.

Battaglia’s warm personality, enthusiasm and deep knowledge long have made him a go-to analyst for the Kentucky and national media, as well reporter and analyst for NBC broadcasts 21 years. He came into the sport early as the son of the late John Battaglia, the influential track manager who created Turfway’s Spiral Stakes as a major Kentucky Derby prep and pioneered night racing in Kentucky, along with turning his sons at an early age into odds-makers and handicappers.

“I had a lot of respect for Warner Jones. This is a big honor to me,” Battaglia said. “Two people were so instrumental in my success, my father and (veteran NBC broadcaster) Tom Hammond. I’m accepting this reward on behalf of myself and my father. He did so much for Kentucky racing and Kentucky horsemen. This is not just a tribute to me, but also to my father.”