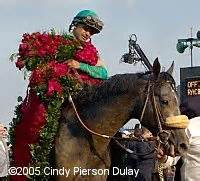 Oakhurst Thoroughbreds announced that they will stand 2005 Kentucky Derby winner Giacomo for 2016-18 as part of the Stronach family’s efforts to boost breeding and racing in Oregon.

Giacomo, the 13-year-old son of Holy Bull is scheduled to fly from Heritage Stallions in Maryland to Oakhurst, near Newberg, Ore. The farm is southwest of Portland, about 30 miles from Portland Meadows racetrack, which is owned by Frank Stronach’s The Stronach Group.

“The Stronach family wanted to do something to stimulate the Oregon breeding industry, which has really dried up in recent years,” said Dr. Jack Root, who owns and runs Oakhurst with his wife, Cookie. “A lot of mares that are being bred in Oregon are being foaled in Washington.”

“That’s pretty good company,” said Root. “I really think Giacomo will help Oregon breeding, generate some excitement, and attract some breeders, including some outside Oregon.”

Frank Stronach’s son Andy has been creating horse racing partnerships to support Portland Meadows and will be acquiring some mares to breed to Giacomo, according to Root.

Giacomo began his stud career at Adena Springs Kentucky and then later stood three years at Magali Farms in California and the past two years at Heritage Stallions. He will stand for $2,500.

The Roots have leased Giacomo for three years in order to give the stallion a fair start. “In my wildest dreams, I never expected this, standing two Derby winners,” Root said. “As soon as Giacomo gets here, we’ll have a Kentucky Derby part in December. It’s really exciting.”