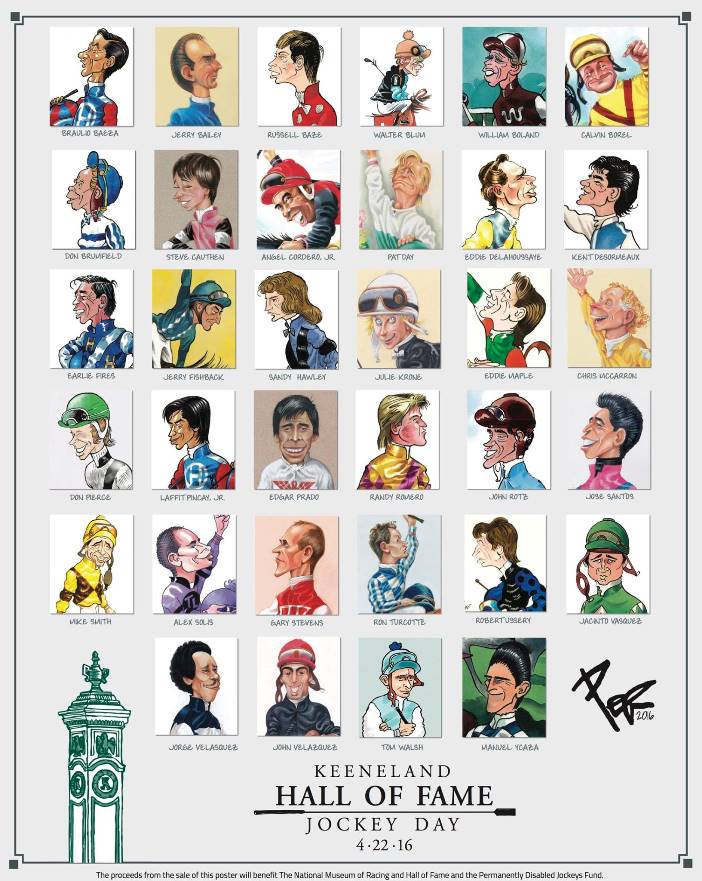 On Friday, Keeneland will honor one of the largest contingents of Racing Hall of Fame jockeys ever assembled. Fans are invited to help celebrate these riding legends during a day filled with recognition, highlighted by an autograph signing from 2-3 p.m. on the North Terrace.

Among the jockeys scheduled to appear are Keeneland’s all-time leading rider, Pat Day, winner of the 1992 Kentucky Derby (G1) with Lil E. Tee; 1978 Triple Crown winner Steve Cauthen; Don Brumfield, who holds 16 Keeneland riding titles and won the 1966 Kentucky Derby and Preakness with Kauai King; three-time Derby winner Gary Stevens (Winning Colors in 1988, Thunder Gulch in 1995 and Silver Charm in 1997); three-time Derby winner and recently retired Calvin Borel (Street Sense in 2007, Mine That Bird in 2009 and Super Saver in 2010); two-time Derby winner Chris McCarron, (Go For Gin in 1994 and Alysheba in 1987); two-time Derby winner Jacinto Vasquez (Foolish Pleasure in 1975 and Genuine Risk in 1980); Laffit Pincay Jr., aboard Derby winner Swale in 1984; and Randy Romero, one of only three jockeys to win six races in one day at Keeneland.

Riders will talk about their accomplished careers during a Q&A session in the Keeneland Walking Ring that begins at 12:05 p.m.

Fans can meet the jockeys during an autograph signing from 2-3 p.m. in the North Terrace.

Jockeys will sign a commemorative poster featuring works by renowned racing artist Peb that can be acquired with a suggested donation of $15 per poster. Proceeds from the signing will benefit the National Museum of Racing and Hall of Fame in Saratoga Springs, N.Y., and the Permanently Disabled Jockeys Fund. Press release.