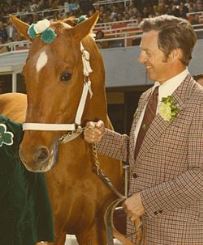 As the 2014 Derby week begins, we are reminded of the story of a great come from behind horse. Silky Sullivan came in 12th in the 1958 Kentucky Derby but people will still talk about him today. In fact, he might have been one of the most unusual horse in racing history. He became famous in California by falling so far behind during the early stages of his races that it looked impossible for him to get home first. His name is even used now as a term in sports and politics for someone who seems so far behind the competition that they cannot win, yet they do.

Silky Sullivan won half of his 14 starts going into the 1958 Derby, including an absolutely astonishing victory in a 6 ½ furlong sprint race in which he trailed by 41 lengths after the first quarter mile.

He became an instant cult figure and folk hero when he won the 1 ⅛ mile Santa Anita Derby by 3 lengths after trailing by 26 lengths on the backstretch.

Silky Sullivan and his future Hall of Fame jockey Bill Shoemaker went into the ’58 Derby as a 2-1 co-favorite. But it was not Silky’s day, he was beaten 20 lengths by Tim Tam.

He was so famous that Life magazine had the trainers wife and my father sit atop the Churchill Downs infield tote board attached to a polygraph test (hey, it was 1958 and the test looked good as a visual – you can see the article on our website under press coverage). See coverage on our Press Coverage page.

Two weeks later Silky failed again, finishing 15 lengths behind the same horse in the Preakness. Silky Sullivan lost his next race by 16 lengths in California and many felt he had lost his appeal to his legions of fans. But then in his next two races, he come from behind style was back.

His trainer, West Coast veteran Reggie Cornell, said “I’ve never seen a horse in my life, or heard of one either, go faster.” Cornell trained horses for movie star Betty Grable and her husband, bandleader Harry James. He was the uncle and mentor of Hall-of-Famer Ron McAnally, who trained John Henry. Willie Shoemaker once said of Silky Sullivan, “You can’t do a thing with him, you just have to allow him to run his own race, at his own speed, in his own style in the first quarter or maybe the first three eighths. And you just sit there and wait, hoping you won’t have to wait too long, because when he really gets going you have to be alert or he might just leave you behind—and then you hold on for dear life”.

While the West Coast horse racing fans loved him, East Coast fans never understood his allure. Even after retirement in 1959, Silky Sullivan attracted huge crowds when paraded at Santa Anita Park on St. Patrick’s Day. His fan mail kept coming even after his death in 1977 at age 18.