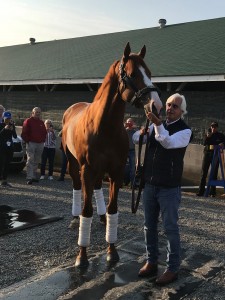 Bob Baffert’s undefeated Triple Crown Champion Justify, fresh off victory in this past Saturday’s Grade I Belmont Stakes in New York, will return home to Santa Anita this Sunday, with an estimated time of arrival at approximately 1 p.m. PT.

Unraced at age two, Justify, a magnificent physical specimen by the late Scat Daddy out of the Ghostzapper mare Stage Magic, was an overwhelming 9 ½ length first-out maiden winner going seven furlongs here on Feb. 18. He followed that with a 6 ½ length one mile allowance win March 11, which propelled him to a three-length score going a mile and one eighth in the Grade I Santa Anita Derby April 7.

Following victories in the Grade I Kentucky Derby on May 5 and the Grade I Preakness Stakes May 19, Justify then joined the legendary Seattle Slew as he became Thoroughbred racing’s second undefeated Triple Crown winner 111 days after he broke his maiden at The Great Race Place.

Owned by China Horse Club, Head of Plains Partners, LLC, Starlight Racing and Winstar Farm, Justify’s next start is as yet undetermined. Although credentialed media are welcome to greet him upon his arrival at Santa Anita on Sunday, Justify will be paraded for all to see in a special ceremony between races a week from Saturday, June 23, at which time Baffert and Hall of Fame jockey Mike Smith will be available for interviews.