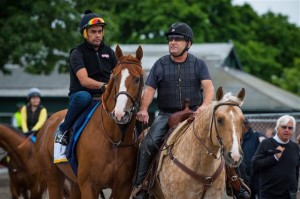 Trainers from A (Paul Aguirre) to Z (Howard Zucker) all were on board with Justify, undefeated winner of the Santa Anita Derby, Kentucky Derby and Preakness Stakes, and 4-5 morning line favorite to conquer nine rivals in the mile-and-a-half Belmont.

About the only dissenter was Dan Hendricks, who opted for Bill Mott trainee Hofburg.

Justify won the Kentucky Derby and the Preakness Stakes. NBC-TV’s national telecast will air from 1 p.m. to 4:15 p.m. Pacific Time, with scheduled post time for the Belmont at 3:46 p.m.

The Belmont Stakes is an American Grade I stakes Thoroughbred horse race held every June at Belmont Park in Elmont, New York. It is a 1.5-mile-long (2.4 km) horse race, open to three-year-old Thoroughbreds. Colts and geldings carry a weight of 126 pounds (57 kg); fillies carry 121 pounds (55 kg). The race, nicknamed The Test of the Champion, and The Run for the Carnations, is the third and final leg of the Triple Crown and is held five weeks after the Kentucky Derby and three weeks after the Preakness Stakes. The 1973 Belmont Stakes and Triple Crown winner Secretariat holds the mile and a half stakes record (which is also a track and world record on dirt) of 2:24.